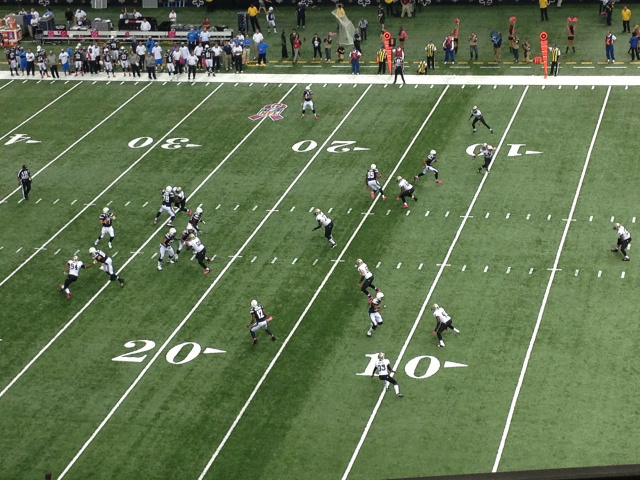 Super Bowl LIII hits Atlanta this weekend as the Los Angeles Rams look to challenge the dominance of the New England Patriots in the annual showpiece finale to the NFL season.
It’s a fascinating contest between two teams who have been in the headlines throughout the season. Here’s everything you need to know ahead of the 53rd staging of the big game.

The red-hot Rams captured the imagination of the NFL fanbase after a blistering start to the season. Under young, dynamic head coach Sean McVay, and bolstered by some key arrivals and contract renewals, the Rams headed into the season looking as strong as they’ve been since the days of The Greatest Show on Turf, back in the days when the Rams were based in St. Louis in the late 1990s-early 2000s.

Throughout the season the Rams showcased their ability to compete with the very best in the NFL as they roared to a 13-3 record, a win-loss radio matched only by the team they defeated in the NFC Championship Game, the New Orleans Saints. But after battling their way through a mid-season wobble and a tough playoff schedule, the Rams made it to the big show, where hopes are high that the dynamic team assembled by coach McVay can announce itself as the new standard-bearers for the NFL.

After a slow start to his career, quarterback Jared Goff has matured into a genuine offensive leader for the Rams this season. His passing has been noticeably more reliable and his ability to stretch the game to dovetail with the team’s powerful running game. That running game, led by part-livewire, part-battering ram Todd Gurley, has been the foundation of the Rams’ success on offense this season. Gurley’s involvement and form has dropped off as the team headed into the playoffs, but thankfully for Los Angeles, six-year veteran – and Super Bowl winner – C.J. Anderson has proved to be a shrewd mid-season acquisition as he has stepped in to shoulder the load in the backfield.

On the other side of the ball, the Rams locked in the NFL’s best defensive player, lineman Aaron Donald, and gave him reinforcements in the considerable form of Ndamukong Suh. The strengthening didn’t end there, with the addition of two of the best defensive backs in the league in the form of Marcus Peters and Aqib Talib. The former pair will be relied on heavily to knock Patriots quarterback Tom Brady out of his comfort zone, while the latter pair will be needed to shut down the Patriots’ receiving corps.

Thanks to the high-flying exploits of the Kansas City Chiefs and their mercurial young quarterback Patrick Mahomes, the Patriots weren’t the headline-making force in the AFC this season, and quietly got on with their business. They won the woefully weak AFC East division with consummate ease, but it was unknown whether the Patriots, led by an aging quarterback and with a side that was strong everywhere but perhaps without A-list performers, would be able to cope with the firepower of the other AFC contenders.

The answer was a resounding yes. Led by the canny coaching of Bill Belichick and the unflappable field generalship of quarterback Tom Brady, the Patriots marched all the way to the Super Bowl once again. Now they’re set to appear in their fourth Super Bowl in the last five seasons, and their third in a row. There has been plenty of player turnover over the course of the last three seasons, but the constants – Belichick, Brady and tight end Rob Gronkowski – have remained in place. The Patriots are old hands when it comes not only to reaching the Super Bowl, but winning it.

Of course, Brady’s presence under center has been vital to the Patriots’ success. The all-time great quarterback appears to be ageless, and is showing no signs of slowing down at the age of 41. Rookie running back Sony Michel tore up the college scene for Georgia last year, and after being gently phased in during the first half of the season, he has been outstanding in the second half as he’s grown into the role of the franchise’s number-one running back. And attacking the Rams secondary are two of Brady’s most trusted targets. Gronkowski had a brilliant game in the AFC Championship Game against the Chiefs, while receiver Julian Edelman remains Brady’s go-to man whenever the big tight-end is double-covered.

Defensively, the Patriots have shown their strength as a unit, rather than with outstanding individual performances. But the likes of linebacker Kyle Van Noy and defensive end Adrian Clayborn have proved to be a driving force for the Pats’ defense at crucial times during the campaign, while Stephon Gilmore has had a stellar year in the Patriots’ secondary.

At the time of writing, the bookmakers featured on leading online odds comparison website Oddschecker appear to be leaning towards the Super Bowl pedigree of the Patriots. New England are best-priced at 7/9 to capture the Vince Lombardi Trophy, with Los Angeles available at 6/5.

Unsurprisingly, Brady is the betting frontrunner to win the Super Bowl LIII Most Valuable Player award. He’s an 11/10 chance, with Rams play-caller Goff second-favorite at 9/4. Opposing running backs Michel and Gurley are both 20/1 shots.

If you fancy a break from the usual offensive suspects and like the idea of backing a rare defensive MVP winner, the Rams’ defensive colossus Donald is the shortest-priced option, at 22/1.

The Show Within The Show

In addition to the game, there is also a plethora of pageantry and entertainment surrounding the game. Pop superstar band Maroon 5 will be headlining the prestigious halftime show, while host broadcaster for this year’s game CBS are charging $5million for a 30-second commercial during the game’s many ad breaks.

The ads themselves are also worth watching, with advertisers and their contracted agencies looking to deliver the most entertaining, most talked-about 30-second spot during the most watched televised sporting event of the US sporting calendar.