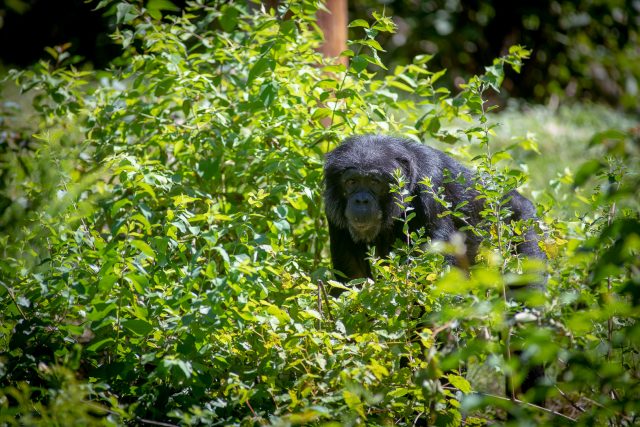 Powell, OH—The Columbus Zoo and Aquarium is mourning the loss of Lady, a 40-year-old bonobo, who drew much-needed attention to her endangered species as one of the four original founder animals of the Columbus Zoo’s bonobo program when she arrived in 1990.

In 2017, Lady was noted to have an aortic dissection during a routine examination under anesthesia.  Being a serious medical condition, the Columbus Zoo and Aquarium partnered with both OhioHealth and the Great Ape Heart Project, and medical management was elected for Lady. To this day, Lady has been monitored closely by Congo zookeepers and Animal Health staff and was also trained to receive blood pressure measurements while awake.

Recently, Lady was noted to be more subdued than normal and not interacting with the other bonobos and Animal Care staff as often. A medical examination on November 9, 2022 revealed the worsening of her condition, as well as the development of additional heart disease. After serious complications were noted during recovery, the difficult choice was made to humanely euthanize Lady.

“Lady had a very sweet and reserved personality, and she absolutely loved her keepers…ready for belly rubs when she greeted them daily. She had an extremely close relationship with bonobo Susie and, even as adults, I would often see the two of them play and laugh like children,” said Audra Meinelt, curator of the Columbus Zoo and Aquarium’s Congo Expedition region.” She was the most beautiful bonobo and was a truly an amazing ambassador for her species. I was lucky to call her my friend for the last 25 years, and I will miss her gentle nature and amazing smile.”

The Columbus Zoo and Aquarium is one of only eight facilities in the United States that currently house bonobos, the last ape species to be discovered by Western scientists. As a result, they are widely unknown to most people. Additional research has shown that bonobos and people share more than 98 percent of the same DNA; in fact, bonobos and chimpanzees are more closely related genetically to humans than they are to gorillas.

With only 5,000-50,000 estimated to be living in the equatorial forests of the Democratic Republic of Congo (DRC), the International Union for Conservation of Nature and Natural Resources (IUCN) lists bonobos as endangered, primarily due to habitat destruction through logging and bush meat hunting.

The Columbus Zoo and Aquarium supports conservation projects working to help bonobos in their native range, specifically through Lola ya Bonobo, the world’s only sanctuary for the species. In 2013, the Zoo also awarded the organization’s founder, Claudine André, with the Zoo’s inaugural Commitment to Conservation Award, which included a $50,000 grant. Claudine and her Congolese staff have rescued and cared for hundreds of bonobos and in 2010, they organized the first-ever successful reintroduction of bonobos back to their native range.

To continue Lady’s legacy of raising importance awareness about bonobos and to inspire people to take action to help protect them, Columbus Zoo and Aquarium guests are encouraged to visit the bonobos and observe their fascinating behaviors. Bonobos live in a fission-fusion society, which means the size of the group (16 individuals) in a given area changes throughout the day. Sometimes, guests will see many of the bonobos together in one place (fusion), and other times, they can be observed split into small groups (fission).