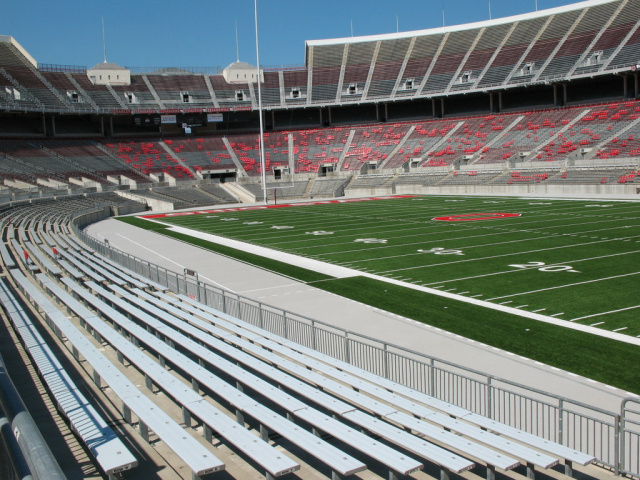 For the Ohio State Buckeyes, 2014 was a significant year for the program. If you look up and down the roster, several players donned a Buckeyes uniform that season that went on to find success in the National Football League.

Joey Bosa, Ezekiel Elliott and Michael Thomas are only a few standouts from that stacked roster. 2014 was a significant season for the program. Not only was Ohio State the home to future NFL stars, but it was also the last time the Buckeyes won the
national championship.

Ohio State flirted with a national championship in recent seasons but have been unable to capture the magic like in 2014. During the 2020/2021 season, the Buckeyes fell to the Alabama Crimson Tide in the National Title.

They have not finished a regular season with more than 2 losses since 2011 and reached the BCS Championship in 2006 and 2007 but failed to win it all. The Buckeyes are consistently one of the NCAA’s top teams but have not been able to capture multiple titles in recent seasons like other top dogs.

Replicating the success of Alabama or Clemson isn’t easy, but Ohio State has been in the mix on multiple occasions.

After the heartbreaking defeat in 2021, Ohio State will attempt to reach the big stage once again. The Buckeyes wrestle with top national programs but haven’t seen the same championship success.

Circling back to the 2014 roster, Ohio State suited up top talents in the nation. Entering the 2021/2022 season, the Buckeyes have the potential to replicate the same success seen during that year.

Looking at the Buckeyes’ roster for the upcoming season, there are many parallels between the 2014 Buckeyes and the 2022 Buckeyes.

One thing Ohio State had in 2014 was explosive speed at the running back position. Master Teague is set to be the number one back in Ohio State. Last season, the 5-11 speedster rushed for 8 scores and 514 yards in 7 games. Teague is also a Sophomore, so he will be a force for Ohio State for years to come.

Of course, what made 2014 Ohio State so dominating was their defense. And in 2021, Ohio State’s defensive group is flourishing.

Zach Harrison is one of the best defensive players in college football. Harrison has become a crowd favorite with the program and is menacing on the edge. Projected to be a first-round draft pick, Harrison is scary. Adding to the defensive prowess, Sevyn Banks is another projected first-rounder. Harrison and Banks are just two Buckeyes
ready to make the jump to the NFL.

Replacing Justin Fields won’t be easy, however. Everyone knows how important the QB position is in college football. Ryan Day will have a tough decision ahead of him, but it’s projected that C.J. Stroud will be named the eventual starter. With that being said, we’re only in May and a lot can change before the start of the season.

Bookmakers and betting sites also believe that Ohio State is a candidate for the national championship. Looking to replicate their success from 2014, Betway Sports has Ohio State at +600 to be the outright winner in 2022.

The Buckeyes own the third-best odds of any college program. Only the Clemson Tigers (+350) and Alabama Crimson Tide (+275) have better odds than Ohio State.

Like the 2014 Buckeyes, the 2021/2022 Buckeyes will be rich in future NFL prospects. The Buckeyes have sent hundreds of players to the show, and this upcoming season should be no different.

What helped the 2014 team stand out was their national championship ring. For a group this talented, and so close to winning on the national stage before, winning the big one is on the horizon.

The Buckeyes will easily be the better team on paper for the majority of their games. But the game is won on the field. Whether you look at the roster or gridiron, Ohio State certainly passes the test.

The dread of losing a national championship is fresh on the mind of several Buckeyes’ roster players. They have reached the pinnacle of college football but left empty- handed.

This team is set to become something special. We’re barely a year away from the next NFL Draft, but scouts and front offices already have their eyes locked in on Ohio State players.

For a program this talented and rich in history, it’s always championship or bust. And for a team that has seen a lot of busts, it’s time for a championship.