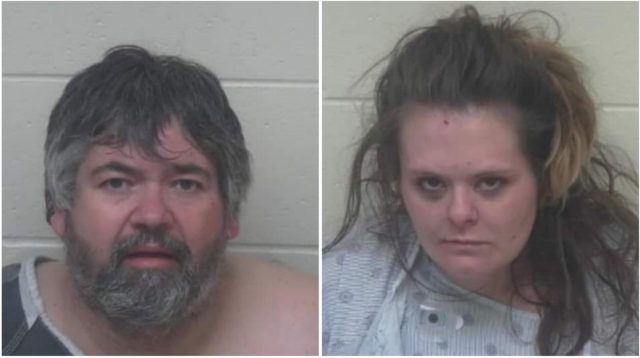 PIKE – Scioto County Sheriff David Thoroughman stated that task force members were assisting the U.S. Marshall’s Fugitive Task Force, along with the Pike County Sheriff’s Office, in the 2300 block of Dry Bone Rd. in Pike County. Ohio on March 4, 2022, at 9:12am. Law Enforcement Officers were attempting to arrest Keith McGuin on outstanding Pike County warrants for Possession of Weapons Under Disability, Carrying a Concealed Weapon, and Improper Handling of a Firearm in a Motor Vehicle.

McGuin, who was in a tan Buick, refused law enforcement commands. McGuin then began to drive the vehicle, turning towards the law enforcement officers and intentionally striking one of the task force members. Deputies from Pike and Scioto County discharged their weapons at McGuin in an attempt to stop the threat.

McGuin then drove through a fence and through a culvert, fleeing the scene. Pike County Deputies initiated a vehicle pursuit and were later assisted by the Adam County Sheriff’s Office. Deputies pursued McGuin throughout Pike County, ending up on Beavers Ridge Rd. at which time he intentionally rammed his vehicle head-on into a Pike County Sheriff Deputy’s vehicle. McGuin was arrested without incident as a female passenger, Kasey Stevens, fled the scene on foot. She was quickly apprehended by Adams County Sheriff’s Deputies. McGuin was in possession of a firearm.

As McGuin fled the scene on Dry Bone Rd. task force members and U.S. Marshalls loaded the injured officer into a task force vehicle and headed towards the hospital. They were met by E.M.S. near State Route 32 and State Route 124, at which location he was flown to Grant Hospital in Columbus, Ohio.