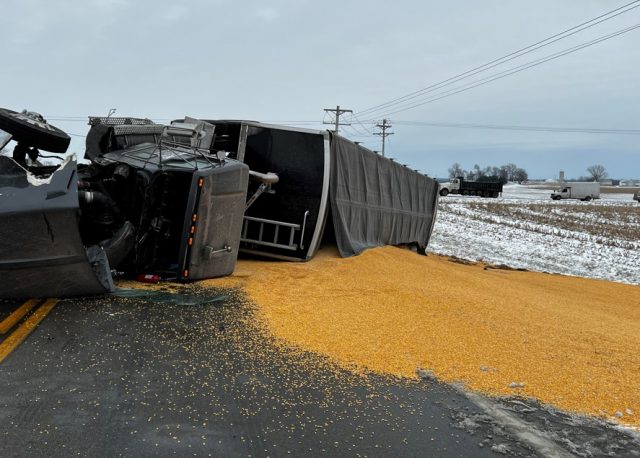 According to Law Enforcement on the scene, the Chevy Z71 truck that was towing a trailer with a Ford Taurus on it pulled out of the Goody Nook located at 2512 US-22 in front of a semi-truck that was heading westbound on 22. The Semi driver attempted to brake and swerve out of the path of the truck to avoid the crash, but the truck then attempted to turn left onto 104 South pulling into the path of the Semi truck driver again causing a rear-end collision.

The pickup truck driver was then forced off the Southwest side of the roadway and struck a telephone pole in the field. The semi-truck driver followed the pickup and trailer into the field where he attempted to get back on the roadway and overturned coming to rest in the middle of 22 just past 104.

The driver of the semi William Smith, Chillicothe only had minor injuries and was transferred to Berger. The driver Shawn Clay, 45 of Wellston, and passenger Ashley Zachariah, 32 of Wellston of the Pickup truck were more seriously injured, helicopters were requested but were denied due to weather, they were transferred by ambulance to Grant Hosptial in Serious condition. The Ford Taurus has knocked off the trailer and came to rest in the middle of the intersection of 104 and 22 it was unoccupied.

The crash shut down 22 in the area for about two hours while clean-up occured. The crash is still under investigation