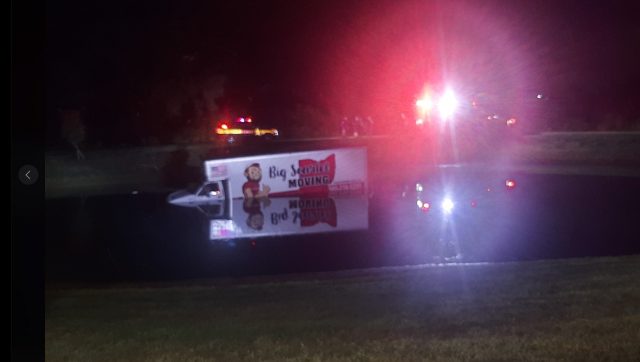 Commercial Point – Two people have been arrested after attempting to run from Commerical Point Police in a large moving box truck and ending up in a local pond.

Around 12:30 am on Wednesday Commercial Point Police were called to the area of the Foxfire New builds off 104 in Pickaway County just north of 762 for a suspicious vehicle in the area. When the law enforcement unit went to check they found a large moving box truck with two individuals inside. When the suspects saw the police they took off in the truck. While the chase ensued the passenger of the vehicle jumped out of the vehicle and ran on foot. The Commerical Point unit radioed for help and continued to chase the box truck. The chase was short as the suspect not knowing the area well turned off the roadway and into a pond in the construction zone. Commercial Point unit called for Fire Department immediately as he saw the truck slowly sinking up to its windows before he reported that the driver was out and swimming.

Pickaway Sheriff’s department and Ohio State Highway Patrol arrived on the scene shortly afterward. A Pickaway Sheriff unit reported that they had one male in custody that was found close to 104.

The commercial point unit lost sight of the other man swimming and an OSP helicopter was called in to aid in the capture of the suspect. Around 30 minutes of searching by helicopter the man was found still in the water of the pond complaining of a leg injury and back pain and wasn’t able to get out of the pond himself. He was transferred to a local hospital.

A search of the box truck found a backpack that contained aluminum foil, a syringe, a small sealed bottle of Narcan, misc hand tools (possible criminal tools), and a wallet that had an “Inmate ID Card.” The vehicle, a box truck from Big Scarlet moving company was stolen four days ago out of Columbus. Two plates on the vehicle one from Ohio and one from Michigan. Inside the back of the box, truck was nothing but trash no stolen items.

Two suspects have not been identified yet by police we will update this post with more info.