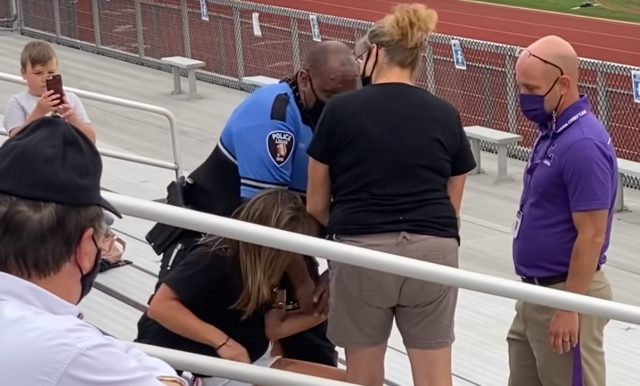 Logan OH- On September 23rd at approximately 5:30 P.M. School Resource Officer Chris Smith was working a special duty detail at the Logan High School Stadium for the 7th and 8th grade football games. The special duty assignment was requested by the Logan Hocking School District to help ensure the safety of the fans and athletes during their inside and outside sporting events.

Officer Smith was walking in the stadium and observed a female sitting in the stands without a mask, he approached the female identified as Alicia D. Kitts and advised her she needed to put her mask on as required by the school policy. Kitts advised that she had asthma and was not going to put it on. Officer Smith advised the Kitts several times that she needed to put her mask on, and that if she did not, she would be asked to leave and would have wait outside the stadium. Kitts continually refused his request and Officer Smith advised her that if she refused to leave, she would be cited for trespassing and escorted off the property.

At this time the officer says that Yvonne Coyler another woman started to interfere with the arrest.

Kitts continued to resist, and Officer Smith placed his Taser on her shoulder area and drive stunned her once. He was able to successfully handcuff the female at that time. An additional officer arrived and assisted in walking the female out of the stadium. She continued to try to pull away from the officers while being escorted out of the stadium and had to be placed into the cruiser.
The female initially refused to identify herself. Hocking County Emergency Medical Services was requested and responded to the scene. The female refused treatment.

The day after the event and through social media backlash Logan-Hocking schools were on lockdown because of threats against the school.