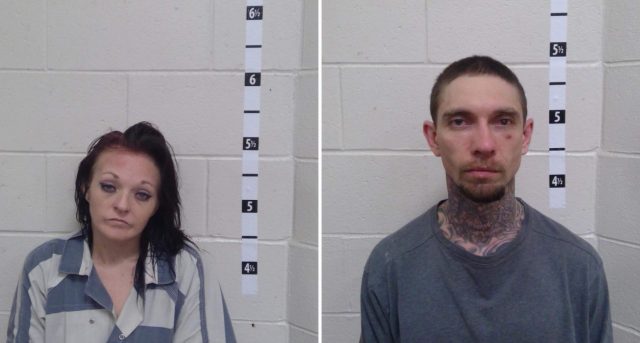 FRANKFORT – Two people are in custody for an armed robbery situation that unfolded in Frankfort yesterday.

Deputies arrived and spoke to a witness who advised that he had driven by the house, which he knew the owner, and observed a vehicle in the driveway that should not be there. The witness found a male and a female there that appeared to be burglarizing the residence. The witness confronted the two suspects and stated the male suspect produced a firearm and ordered him to the ground. The witness stated while he was on the ground he heard gunshots and then saw the two suspects flee into the wood line.

More deputies arrived at the scene and set up a perimeter. The two suspects were observed exiting the wood line and getting into a vehicle on CountyRoad 550. At that time, Deputy Roderick with the assistance of the Ohio State Highway Patrol conducted a felony stop on the vehicle at 5417 CR-550 and detained several individuals.

Through the course of the investigation, two subjects in the vehicle matched the description of the suspects from the scene and they were subsequently arrested and charged stolen items from the residence were also recovered in the vehicle.

Caitlin Ratliff was charged with

Brandon Stodgel was charged with

Some details are still under investigation by Ross County Sheriff’s office.