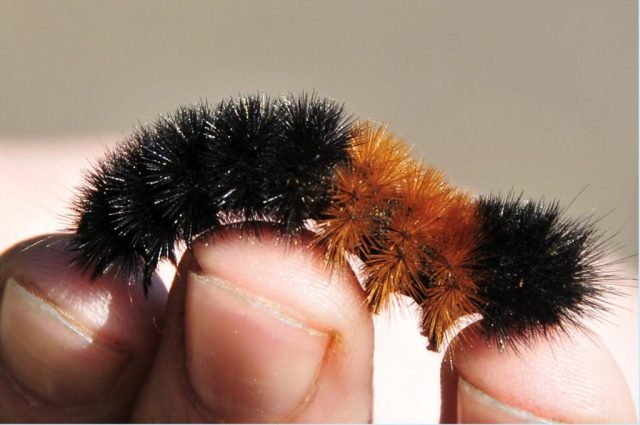 OHIO – If you have been on social media you may have seen people posting photos of this brown and black caterpillar called the Wolly Bear and heard the superstition of its ability to detect the severity of our winter.

The Wolly Bear also called Wolly worms, shows its fun color in the fall in one of its life stages, this moth larvae form is heavily covered in brown and black fur. The caterpillar emerges in the fall from an egg and over the winter spends its life as the furry little caterpillar you see now. The small creature survives winter freezes by producing a cryoprotectant in its tissues. Once the weather warms, the larva devours all the grass and weeds it can, pupates, and becomes an adult Isabella tiger moth (Pyrrharctia Isabella).

The fuzziness serves a purpose surprisingly it’s not there to keep the caterpillar warm but actually control its ability to freeze controllably. The long hairs control the rate at which the animal slowly freezes a substance called glycerol, which works in their bodies like an organic antifreeze, that works in the insect’s body to prevent their inner cells from freezing, allowing them to survive even the most extreme winter weather conditions. Its been proven that this insect can survive in 90 degrees below weather and has said to be frozen in ice and survived, but they don’t spend the entire winter in this paralysis that’s why you see them from time to time throughout the winter. Warm winter days defrost these creatures and they move about until the temps drop again and they are back to their frozen-in spot locations. In fact, they can repeat this freeze-and-thaw cycle many times over the winter.

This is extremely helpful for these insects in the northern areas of the world where they are as common as they are here.

Some people believe common folklore, which has it that the forthcoming severity of a winter can be predicted by the amount of black on the caterpillar, but sadly that’s not true a statement after the lore was proven false by the National Weather Service

“The woolly bear caterpillar’s coloring is based on how long the caterpillar has been feeding, its age, and species.  The better the growing season is the bigger it will grow.  This results in narrower red-orange bands in its middle.  Thus, the width of the banding is an indicator of the current or past season’s growth rather than an indicator of the severity of the upcoming winter.  Also, the coloring indicates the age of the woolly bear caterpillar.  The caterpillars shed their skins or molt six times before reaching adult size.  With each successive molt, their colors change, becoming less black and more reddish.  In addition, there are approximately 260 species of tiger moths (the adult of the woolly bear caterpillar) in North America, and each species has slightly different color patterns and hair coverings.  As a result, some of the color and hair variations that we see each fall are a result of these different species.”