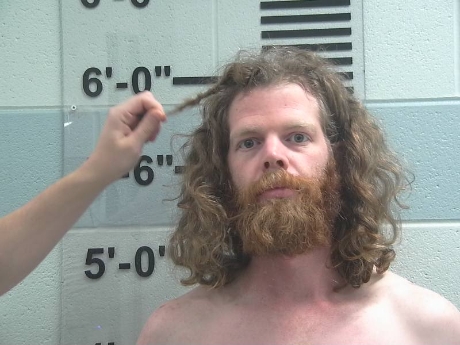 LANCASTER – A man was arrested after several people called 911 with the report of a man with a gun pointing at people.

According to Fairfield County Police department on December 10, 2021, Deputy Miller was dispatched to the Circle K Gas Station located at 4400 Coonpath Road in Greenfield Township on a report of a man with a gun. upon arrival, the officer was receiving radio traffic that the Male pointed a gun at a truck driver that was parked on the lot, and he was wearing black pants and a black leather jacket and was possibly over by Wendy’s restaurant area. As the Deputy pulled in the front entrance, He noticed a male standing by the Mailboxes at the front entrance of the business matching the description from Dispatch. With gun drawn the deputy approached the man and saw that he also had a gun in his hand.

When the Male noticed the officer, he raised his firearm from being pointed to the ground and pointed in the direction directly at the officer. The officer pointed his gun back and gave the Male several commands to drop the gun and he refused, only to say to shoot him.

“As The Male kept his gun pointed at me, we walked back closer to the gas pumps where there was more direct light from the business, I then was able to determine the gun was fake. The Male then continued to walk backwards towards the front of the business, I followed with my gun still aimed at the male, but I only concentrated my aim more on his right shoulder area,” said the deputy in the report.

The Male then walked into the Circle K gas station, where he was still given instructions to drop the gun and he would not comply. After being inside the business other units arrived on scene. The Male was talking but was not making any sense. The Male kept saying his car was towed in Texas and he wanted his car back.

“After the Male realized that I knew the gun was fake and after I told another Deputy on scene, the Male then pulled a knife that was on a lanyard that was around his neck and stuck the handle of the knife towards his chest with the blade and the tip pointed at me, The Male never removed the knife from around his neck, then it appeared the Male was bringing the knife closer to his own neck area,” it said in the report.

Officers then tried to communicate with the Male and talk him into dropping the gun and the knife and to reassure him that they were there to help him, but he refused to drop either weapon.

Officers then deployed tasers both tasers were successfully struck. One barb of my taser struck him in his right shoulder area while the second barb struck him in the abdomen area. The Male’s body then locked up and fell to the ground. At no point did the Male strike his head on anything in the store while he fell. The Male was then handcuffed, and the knife was removed from his neck.

Once the evidence was collected, the gun was found to be in fact rubber.

Nathaniel Coleman-Roush was arrested and charged with Aggravated Menacing, Disorderly conduct, inducing panic, failure to comply with a police order, and caring a concealed weapon