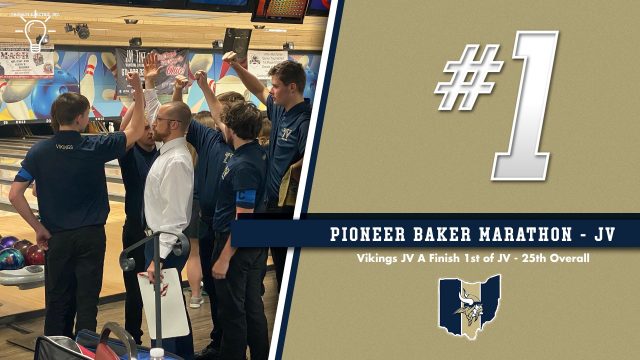 The Vikings finished 15th at the Pioneer Baker Marathon on Saturday at the Columbus Square Bowling Palace.

The Vikings (8-0, 6-0 COHSBC, 3-0 OCC-Buckeye) will take some time off for the holidays, and return to practicing on December 26th. The team has shown tremendous growth and improvement this season under Coach Erik Fischer. The next match is on January 6 against Olentangy Berlin at Wayne Webb’s Columbus Bowl. It will be FFA Night for the match, honoring the men and women in Teays Valley’s FFA Program.

The Lady Vikings were down 3 key players today due to the holiday break. However, the 6 young ladies that competed stepped up under the leadership of Coach Leah Deaner and Sophomore Captain Kenna Barnes. The five freshmen; Gretchen Stachler, Morgan Laxton, Emma Cremeans, Abby Perdew, and Mackenzey Oliveri; made crucial adjustments and continued to show growth and improvement during the season.

The Lady Vikings (4-4, 3-3 COHSBC, 2-1 OCC-Buckeye) enter the holiday break until returning to practice on December 26th. The next competition will be on Friday, January 6th at Wayne Webb’s Columbus Bowl against Olentangy Berlin. It will be FFA Night, which will honor our men and women in the FFA Program.

The JV-A Vikings finished 1st of the 7 JV teams at the Pioneer Baker Marathon on Saturday at Columbus Square Bowling Palace.

The JV-A Vikings (6-1, 5-1 COHSBC, 2-1 OCC-Buckeye) will enter the holiday break on a hot streak. After dropping the first match, the JV team won 6 matches in a row and finished in 1st among the JV teams at all tournaments that they have competed in. This is a tremendous accomplishment and displays the work ethic of Coach Cunningham and the JV bowlers.

The JV-A Vikings will return to practice on December 26th, and return to competition play on January 6th against Olentangy Berlin.

The JV-B Bowling team finished 6th of the 7 JV teams at the Pioneer Baker Marathon on Saturday at the Columbus Square Bowling Palace.

The young JV-B team has continued to show improvement during the season. The JV-B team has defeated an opponent in each of their last two tournaments and is 1-0 (1-0 COHSBC, 1-0 OCC-Buckeye) on the season.

The team, which is led by Coach Chuck Cunningham, has done a remarkable job of improving their fundamentals and spare shooting this season. Without any returning players on this lineup, each player has had personal bests throughout the season and continues to grow.

The team will take time off until returning to practice on December 26th.