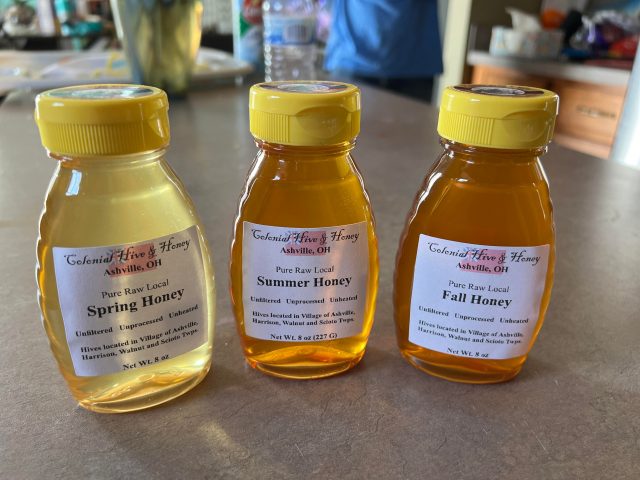 PICKAWAY – Did you know that not all honey is the same? That depending on the season and where the bees Buzz the honey can taste quite different?

We challenged our home to a honey taste test from a local Pickaway county honey farm captured in different parts of the year, and we had some amazing results.

Today we picked up three 8 oz jars of honey from our local Circleville Apothocary. Each was labeled from Colonial Hive & Honey in Ashville Ohio, all three were unfiltered, unprocessed, and unheated honey, the only difference was one was collected in the Spring, one in the Summer, and one in the Fall.

At first Tana Newman told me that she picked out the bottles because of the difference in color and wondered if they would taste different but didn’t expect a significant difference in taste, she was wrong.

Honey is a regional product and according to beecollectors.com, the US is broken up into around seven or eight distinct agricultural areas of the US where the honey and what flowers that have gone into the production have big impacts on the flavor and texture.

Because of this particular taste test, regionalism was not part of the test but the season, but that also can affect flavor.

Changing seasons also affect a honey’s taste, texture, and color. A plant only has so much sugar to disperse to its blossoms. In spring, when those blossoms are just bursting, the resulting honey tastes less sweet. Later on in the season, when plants are competing like mad for pollinating bees to pay them a visit, they compound more sugar and nutrients into fewer flowers, producing darker, more full-bodied kinds of honey, like the late-season buckwheat and goldenrod.

There are obviously exceptions to that rule, but if you compare spring, summer, and autumn kinds of honey from a single producer, it’s easy to see the differences in color alone, from light yellow to deep orange and rusty brown.

Just like in our honey. In the taste test, it was exactly that significant the spring honey tasted really sweet, the summer honey tasted much like Bob Evans Honey, and the fall was much more profound and slightly more bitter.

Summer honey was a first place for the Newman home, with Spring a close Second, no one voted for Fall honey in our house, but tastes vary as much as honey I guess. Give it a try and let us know what you think.