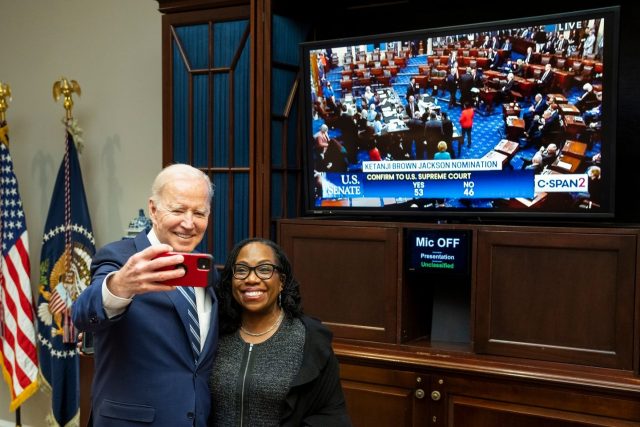 “Judge Jackson’s confirmation was a historic moment for our nation. We’ve taken another step toward making our highest court reflect the diversity of America. She will be an incredible Justice, and I was honored to share this moment with her,” President Biden said on Facebook

Since Justice Stephen Breyer announced his retirement, President Biden has conducted a rigorous process to identify his replacement.  President Biden sought a candidate with exceptional credentials, unimpeachable character, and unwavering dedication to the rule of law.  He also sought a nominee—much like Justice Breyer—who is wise, pragmatic, and has a deep understanding of the Constitution as an enduring charter of liberty.  And the President sought an individual who is committed to equal justice under the law and who understands the profound impact that the Supreme Court’s decisions have on the lives of the American people.

As the longtime Chairman of the Senate Judiciary Committee, the President took seriously the Constitution’s requirement that he make this appointment “by and with the Advice and Consent of the Senate,” seeking the advice of Senators in both parties.  He studied the histories and case records of candidates, consulted legal experts, and met with candidates.

A former clerk for Justice Breyer, Judge Jackson has broad experience across the legal profession – as a federal appellate judge, a federal district court judge, a member of the U.S. Sentencing Commission, an attorney in private practice, and as a federal public defender. Judge Jackson has been confirmed by the Senate with votes from Republicans as well as Democrats three times.

Judge Ketanji Brown Jackson
Judge Jackson has devoted the majority of her career to serving the public—as a U.S. Sentencing Commission lawyer and commissioner; as a federal public defender; and as a federal judge. Judge Jackson currently serves on the U.S. Court of Appeals for the D.C. Circuit. From 2013 to 2021, she served as a United States District Judge for the District of Columbia. She has been confirmed by the Senate on a bipartisan basis three times – twice as judge and once to serve on the U.S. Sentencing Commission.

Prior to serving as a judge, Judge Jackson followed in the footsteps of her mentor Justice Breyer by working on the U.S. Sentencing Commission—an important body, bipartisan by design, that President Biden fought to create as a member of the U.S. Senate.  Her work there focused on reducing unwarranted sentencing disparities and ensuring that federal sentences were just and proportionate.

Judge Jackson lives with her husband, Patrick, who serves as Chief of the Division of General Surgery at Georgetown University Hospital, and two daughters, in Washington, D.C.

Today Judge Brown was confirmed with a 53-47 Vote