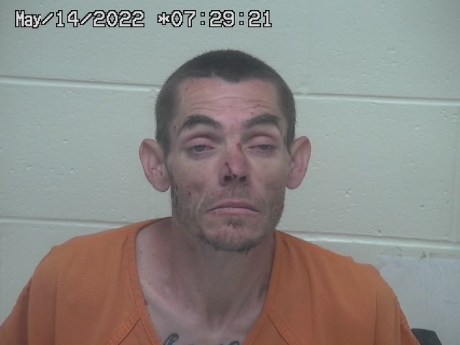 Scioto County Sheriff David Thoroughman had released information earlier in reference to Garry Schackart, a suspect involved in multiple burglaries and thefts around the Lucasville, McDermott and Pike County areas.

Sheriff Thoroughman stated that his detectives and deputies, along with the assistance from the Ohio State Highway Patrol, had been actively searching for this suspect for several days.  This search included the search of several locations, which resulted in stolen property being recovered and multiple people being charged.

On Friday, May 13, 2022, detectives and deputiesresponded to the Lucasville area after they received information that the suspect had stolen another vehicle.  While searching for the suspect, he parked the vehicle, that he had just stole, and stole another vehicle.  That vehicle was a 2021 Ford F-150 truck in which he later crashed into a tree and fled on foot.

The search continued the entire day. Later, deputies observed the suspect on an older model John Deere Gator on Carpenter Road. Deputies pursued the suspect and lost sight of him as he jumped from the John Deere, fleeing into a field.

Sheriff Thoroughman stated that at 11:05 p.m. his office received a call from residents on Carpenter Road, stating that they heard a sound coming from the crawl space of theirhome.  Deputies responded to that location and found the suspect in the crawl space.  They were able to detain the suspect without any further incidents.

Sheriff Thoroughman stated that this is still an ongoing investigation that will result in more charges being presented to the Scioto County Grand Jury on a later date. Detectives and deputies are currently searching for Schackart’sgirlfriend, Missy J. Branyord, age 36. She is described as 5’06” 180 lbs. with brown hair and hazel eyes. Branyordcurrently has indictment warrants for her arrest on charges of Burglary, a felony of the 2nd degree and Receiving Stolen Property, a felony of the 5th degree.

Sheriff Thoroughman would like to thank the Ohio State Highway Patrol for their assistance, and the community who called in information and tips.