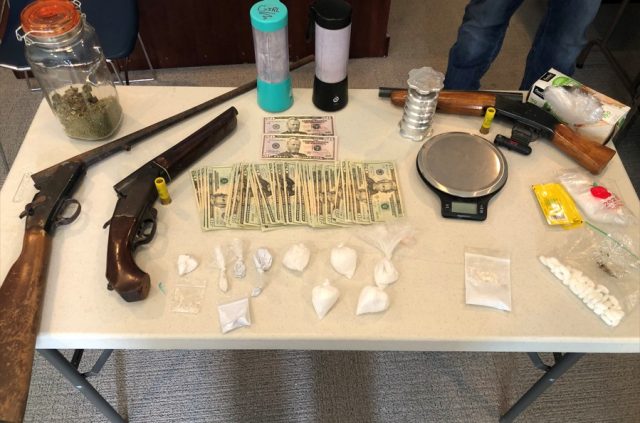 Scioto County Sheriff David Thoroughman announced that a complaint of a suspicious person in West Portsmouth lead to the discovery of a large about of Methamphetamine.

On Wednesday, May 4, 2022 at approximately 1:26 a.m., a call came into the Emergency Communications Center of the Scioto County Sheriff’s Office. The caller advised of an unknown person in her driveway, located in the 200 block of Coleman Rd. West Portsmouth, Ohio.

Deputy Conley, following up on the complaint, went to 552 Coleman Road, along with Sergeant Brian Nolen. Upon their arrival they located two vehicles parked in the roadway blocking the road. One of the vehicles were the Ford Mustang, the second vehicle was a Mazda truck.

As the owner entered the house the deputies remained outside the entrance, watching the owner. The owner entered a separate room, at which time deputies heard screaming and arguing from within the room. The deputies then entered to ensure the safety of everyone inside.
Deputies located drugs, a firearm, and drug paraphilia in plain view after entering.

Shepherd then reentered the vehicle that he arrived in. Sergeant Nolen asked if he had anything illegal in the truck, and he advised that he had a small amount of marijuana. Shepherd removed a container which contained marijuana. Deputies located a set of scales in the truck.

Deputies contacted the Organized & Major Crimes Task Force to respond. A consent search was conducted of the residence and a locked safe was located, as well as a “pill press”. Shepherd advised that he does not know whose safe it was, nor how it got secured to the walls of his residence. The Task Force took possession of the safe, transporting it to their office, in attempts to obtain a search warrant.

A search warrant was obtained for the safe. Inside the safe was located 125 grams of Meth, 34 grams of Fentanyl, 7 grams of Cocaine, $1,000 cash, and two (2) sawed-off shotguns with lasers. The case is still under investigation and will be presented to a Scioto County Grand Jury for charges.