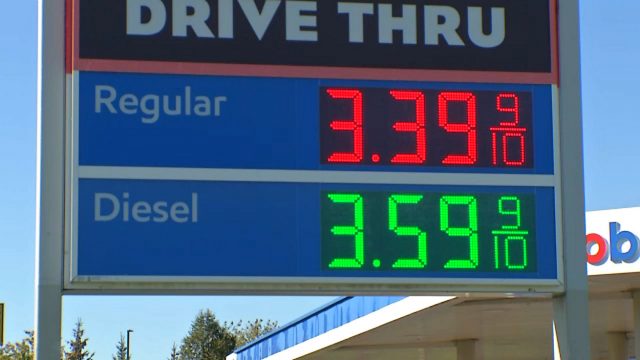 US – The national price of gas is already at a multi-year high at 3.59 per gallon of gas last week, but due to sanctions and a seasonable time of year it’s going to go higher guaranteed.

“It’s simply looking like a perfect storm for motorists at the pump, with little to no relief anytime soon,” said Gasbuddy in a press release.

“The Russian invasion of Ukraine has sparked high-level concern that oil production could eventually be stifled, or even sanctioned, from the world’s second-largest oil producer, leading to less supply as demand grows. That possibility has pushed up the national average price of gasoline considerably in the last week, and the situation could worsen at any time, keeping gas prices elevated for the foreseeable future,” said Patrick De Haan, head of petroleum analysis at GasBuddy. “In addition to the unstable situation with the Russian invasion, we’re also entering the time of year that seasonality pushes gasoline prices up by anywhere from 25 to 75 cents by Memorial Day.

Crude oil prices spiked today selling at around $95.80 per barrel, a 4 dollar gain since last week, but leveled out around 2 by the end of the day. These costs will transfer to the pump over the next few weeks slowly by gas stores.

With questions rising on what will happen to the 2nd largest crude oil producer in the world, with energy sanctions against them, Russia could possibly just cut the flow to those countries, and prices of gas would skyrocket.

We also are heading into spring, and travel season that will push more demand at the pump, this is when we usually see an increase in gas prices anyways.