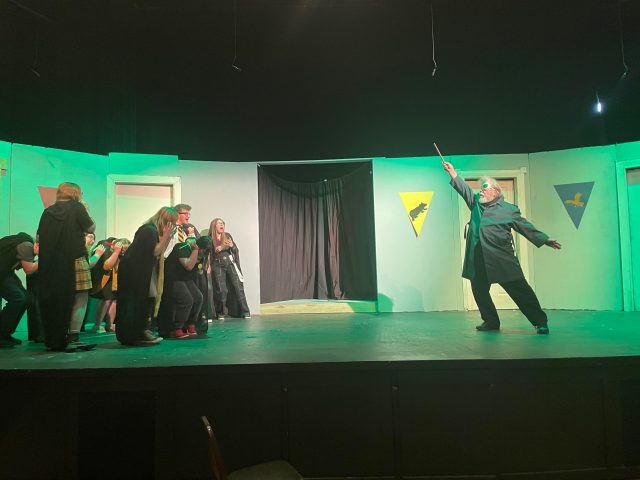 Roundtown Players’ Puffs the Play opens on Friday, May 20th at 7 pm and will run for two weekends. Puffs, or Seven Increasingly Eventful Years at a Certain School of Magic and Magic, is co-directed by RTP veteran actors Reggie Allison and Megan Gotham. According to Gotham, “Puffs is a comedy about a certain, legally different, school of magic, and what happens from the Puffs perspective as Mr. Potter makes the school an interesting, and increasingly dangerous, place to be.” Gotham added, “The show was chosen because the theatre has been basically closed since COVID, and we wanted to do a show that could interest a large audience. Reggie Allison (my co-director) and I are huge nerds, and Reggie insisted that Puffs would be an easy, fun show to do.”

RTP does advise that this show features adult themes and language, so it might be best to get a babysitter for youngsters under the age of 13. The cast is composed of several teenagers and adults. According to cast member Clayton Mogan, “This show has been a challenging and rewarding experience. The opportunity to work with so many young cast members gives me hope for the future of the theatre and its place in this community.”

Cast member Brendan Gaines shared his thoughts- “When life gets down on you, find happiness. I feel like I needed to do this show more than this show needed me in this cast. The cast is so gelled together and I love shows like that. We’re all really close to each other. It’s definitely been a stress reliever and a much needed distraction during the rough times I’ve been experiencing lately.”

Audience members are encouraged to don their robes and dress as their favorite witch or wizard. “If anyone has a robe they need a good excuse to put on- this is their event,” said Gotham. Fans of the well-known Harry Potter series will recognize several characters. Being a huge Harry Potter fan myself, this reporter found herself laughing several times at jokes that seemed to be just for Potter fans. On the topic of being a Puff, cast member Tracy Kawasaki said,  “Puffs. What can I say? For hard-core Potter fans, it’s a bit blasphemous. Satirical? Definitely! Nothing is sacred. From what is important to the Puffs- your rooms are close to the kitchen- to what it means to be a Puff- Loyalty, Friendship, and just being doggoned Nice. Puffs fail, a lot! But failure is just another kind of practice until, eventually, you get better. Maybe, possibly, you just might take third place. You could belong to a house known for being smart, being brave, or just being cunning and sneaky. But if you are from the Puff house, you can be everything else. Puffs can teach you about perseverance, doing your best, and choosing to do what is right, instead of what is easy. For some, being a Puff just feels right, I am proud to be a Puff.”

According to puffstheplay.com, “Puffs is a stage play written by Matt Cox as a transformative & transfigured work under the magic that is US Fair Use laws. Puffs is not authorised, sanctioned, licensed or endorsed by J.K Rowling, Warner Bros. or any person or company associated with the Harry Potter books, films or play.”

Tickets are on sale now- https://www.eventbrite.com/e/puffs-the-play-viewer-discretion-advised-tickets-317797790747?fbclid=IwAR0uJWaRoYX-61JqwaSryiDaiML9SEYfQJb8-0yhZ8RrM42ELChUkxw_nKg