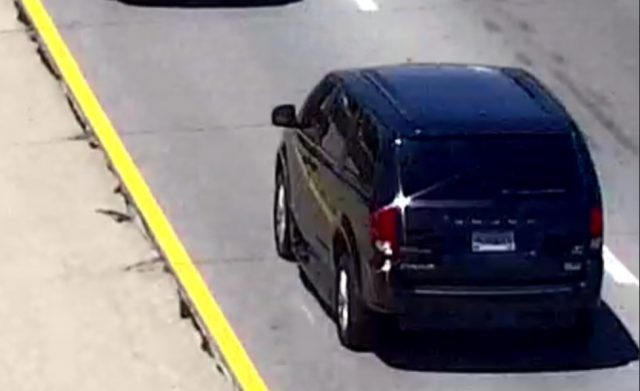 On June 27, 2022 at approximately 12:47 p.m., Columbus Police Patrol officers were dispatched to 2835 Fred Taylor Drive on a report of a vehicle that was struck by gunfire. Upon the officer’s arrival, they spoke to the victim. The victim stated she was traveling west on I-670 near Exit 4B, which is the Third Street/High Street exit. She stated a navy blue Dodge Caravan pulled alongside her and was trying to change lanes. She explained that there was not enough room for the van to get over, so she honked the horn to alert the driver that there was not enough room. She explained the passenger side windows went down and she heard a single gunshot. The victim’s vehicle was struck by the bullet on the rear driver’s side. The bullet went through the backseat and lodged into the front passenger seat.

She added after the unknown suspect fired the gunshot the Dodge Caravan exited the freeway towards the Third Street / High Street exit.

The victim stated the Dodge Caravan had handicapped plates on it and it appeared to be modified to accept a mobility chair.

Crime Stoppers is offering a cash reward for any information leading to the arrest and/or indictment of the person(s) responsible for this crime. Anyone with information about this crime is asked to call Crime Stoppers at 614-461-TIPS (8477) or go to our website at www.stopcrime.org and submit your
tip. You may also submit a tip by downloading our new free P3 Tips mobile app available on the iOS and Android platforms. We are no longer taking tips via text message.

Crime Stoppers is a non-profit 501(c) (3) organization. Reward money comes from private individuals, businesses, and foundations that see Crime Stoppers as an integral tool in the community’s fight against crime. Tax-deductible donations can be sent to Central Ohio Crime Stopper’s, Inc., and
P.O. BOX 16038, COLUMBUS, OH 43216-6038.