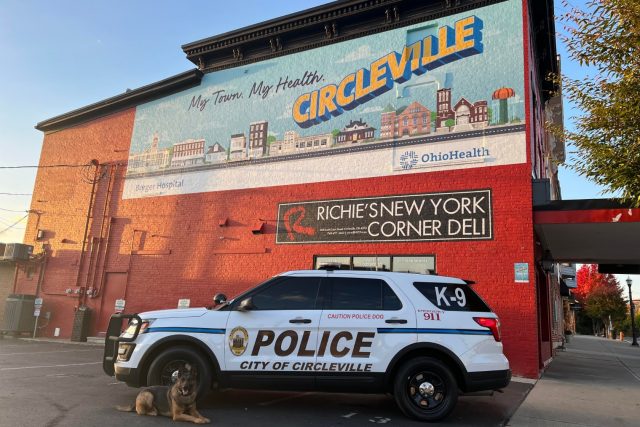 Circleville – If you have driven on Court Street in downtown Circleville today you may have seen a change in scenery in the area of Franklin street.

Verito properties which owns the building that Richie’s New York Corner Deli is located in at 206 South Court Street erected a large wall scape that depicts several historical buildings in the downtown area, some of which are not with us anymore. Along with the mural the Wallscape will offer an interactive feature that would show drawings and photos of these historic buildings in a video grandstanding Circlevilles Historic Downtown. Words on the wallscape say “My Town. My Health”

“The wallscape is two years in the making,” said Richie Verito, “I would like to thank everyone who helped bring this over two-year project to fruition, Especially Teratia Welch for all her hard work, dedication, and support during all the challenges of this project. Galen Harris, senior designer for Ohio Health, and the rest of her team worked on the design and layout. Tim Colburn, President of OhioHealth Berger hospital, Brian Short eclipse creative and his team, Matthew O’Leary of O’Leary Law Firm who has worked so diligently on all the legal aspects of this, Mindy Drayer and Mikaela Hunt for having Teratia and me on their show What matters with Mindy and Mikaela to talk about this project. The Scioto post for all their continued coverage from the start of this. LuAnn Stoia Fox28, Nicole Davis of, Getting Noticed LLC for our press release as well everyone in and out of our community that supported us I thank you and love you.”

Ohio Health Teratia Welsh said that they partnered with Pumpkin show Inc. to put the wallscape in Pumpkin show park to beautify the area, and that’s the plan here also working with the building that Richices Corner New York Deli

“Partnering with Richie’s and other local businesses to better the community and demonstrate our support is a top priority for Ohio- Health,” stated Tim Colburn, President of OhioHealth Berger Hospital. “We are excited to see this two plus year project finally become a reality. We hope the community is proud of the artwork and feels a sense of nostalgia as they reflect on some of the history of our community. OhioHealth continues to be committed to giving back to the communities we serve in traditional and non-traditional ways, this is a reflection of that commitment.”