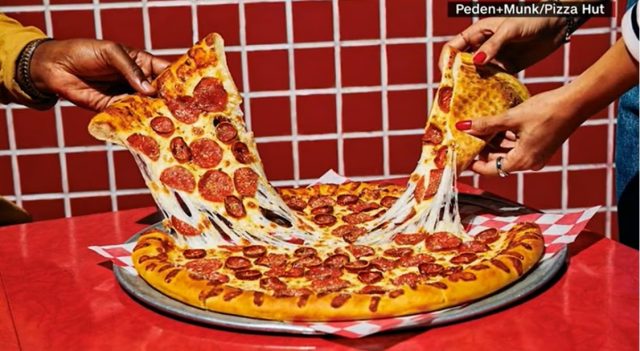 US – This week Pizza Hut announced its going back to the 90s to pull some history out and offer it up to the masses.

The  famous 16” New York-style pizza, “The Big New Yorker,” will return to its menu after its initial launch 24 years ago. The iconic pizza will be available at participating Pizza Hut restaurants nationwide for a limited-time only starting February 1, 2023.

The Big New Yorker is inspired by the spirit of New York with an XL pizza that is as big and bold as the city that never sleeps. Each 16″ pizza features six oversized, foldable slices with crispy crust and bold flavors including sweet marinara sauce and Parmesan oregano seasoning on top to mimic an authentic New York pizzeria build. One order of The Big New Yorker extra-large pizza comes with double pepperoni, or one choose-your-own topping for a price starting at $13.99*. Orders can be customized with extra toppings or extra cheese for an additional charge.

Pizza Hut says that they decided to return the New York Pizza after several social media accounts were created in fan fare of the item.

“The Big New Yorker was a huge hit when we launched it in 1999, setting the stage for future industry innovations like Pizza Hut Melts™ and Detroit-Style pizza,” said Lindsay Morgan, Chief Marketing Officer at Pizza Hut. “At 30% larger than our large pizza, now is the perfect time to answer our customers’ requests and bring back The Big New Yorker in a big way right before the big game next month.”