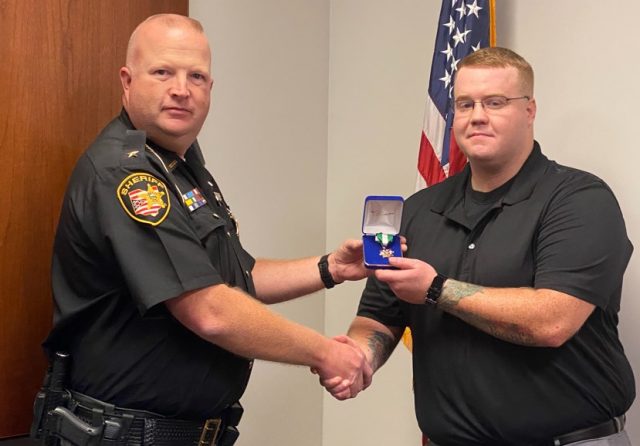 According to Pickaway County Sheriff’s office on December 24, 2019, three minutes before Christmas a 911 call came in from a distraught man asking for help because a 37-year-old family member had stopped breathing was unresponsive. While taking information dispatcher Logan Keeton kept a cool head, tried to calm the frantic man, and then started instruction on life-saving efforts.

Keeton dispatched emergency services but it was winter, foggy and roads were ice-covered which slowed the response of first aid to around 15 minutes.

911 dispatchers are not only information gatherers and dispatchers, but some are Telecommunicator CPR a special skill that they train for. Each year an estimated 350,000 sudden cardiac arrest (SCA) events occur in the United States in an out-of-hospital environment. Almost all of these events result in a call for help to 911. Without quick intervention in the form of cardiopulmonary resuscitation (CPR) and defibrillation, death from SCA is certain.

While on the phone Keeton used his training and instructed the man how to continually give CPR, when Harrison Township fire/EMS arrived on the scene the woman, had started coming around and according to the report she spontaneously regained circulation and was actually communicating with medics while on the way to the hospital.

Chief Chad Noggle of Harrison Township Fire department said, “it is my estimation that without Logan giving life-saving instructions to the bystander, this event would not end in this way. Logan should be commended for his professionalism and execution of trained when it mattered most.”

Keeton says he feels like he was doing his job what he was trained to do, that he gets calls similar to this all the time, but this call, in particular, resulted in saving a life.

Pickaway County Sheriff Hafey said during the award ceremony, “Logan, your dedication and professionalism saved the life of the woman that night. Although you were not physically present, your training and expertise were conveyed through the phone to the bystander who acted on your behalf. It is most fitting that you be awarded the lifesaving medal for your actions that day.”