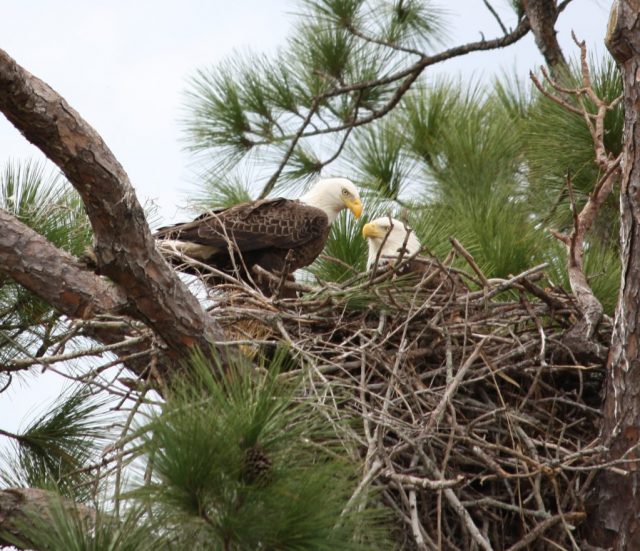 OHIO – Ohio’s resurgence of the nation’s first bird has been significant over the last 20 years, once endangered in Ohio now you can find them in every county.

Ohio Division of wildlife has been counting the number of nesting eagles for years and have reported year after year a significant incline.  In 1979, only four breeding pairs of bald eagles were reported in Ohio, according to officials with the state’s Department of Natural Resources. In 2019 a nesting survey showed approximately 707 Eagle nests are within the state of Ohio, a new survey for spring of 2022 estimates 824 nests, the question is what changed?

Several different factors contributed to the decline and almost extinction of the Ohio Bald Eagle and most of it was the use of a pesticide called DDT. DDT, Habitat destruction, illegal shooting, and contamination of its food source were the top factors according to Ohio game and wildlife.

According to Wildlife statistics since the banning of DDT and more resources around protecting of nesting sites Eagles have soared. From 2013 to 2017 population was more than just stabilized but a 5% increase was seen, and in the last two years that increase has risen to an unprecedented 20 to 30%.

Bald eagle nesting activity increases in Ohio during the winter months, providing additional chances to see these majestic birds hunt, repair their nests, and establish territory, according to the Ohio Department of Natural Resources (ODNR) Division of Wildlife. January is also when Ohio’s bald eagles begin courtship and pair bonding.

An eagle’s large size, impressive wingspan, and dark body is easy to spot against winter snow and ice. Look for these large raptors wherever they can find clean water and abundant food. They can be found roosting along rivers, sitting on frozen lakes, or even in open farm fields.

“Bald eagles are flourishing in Ohio because of improved habitat and water quality in wetlands, and this habitat will only continue to improve through wetlands restored and created through our H2Ohio initiative,” said Ohio Governor Mike DeWine. “Wildlife areas have also been increased and restored, in part, thanks to funds from our sportsmen through hunting license purchases. These large tracts of wetland habitats provided the necessary space for eagles to nest and raise their young, expanding from only four nesting pairs in 1979.”

Bald eagles in Ohio typically lay eggs and incubate in February and March, nesting in large trees such as sycamores, oaks, and cottonwoods. Meanwhile, frozen lakes and rivers force the birds to expand their hunting grounds in search of fish and carrion, their foods of choice.