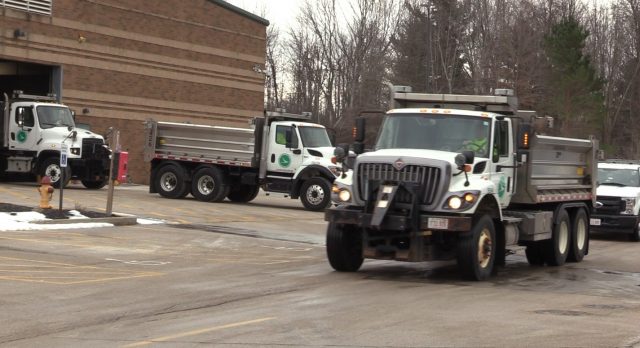 (COLUMBUS, Ohio)—Ohio Governor Mike DeWine announced Thursday that he has dispatched support from the Ohio Department of Transportation (ODOT) to aid in emergency snow removal efforts in the state of New York following the deadly Christmas-weekend blizzard.
A convoy of 28 ODOT workers, 12 tandem dump trucks, two utility mechanic trucks, and four crew cab pick-up trucks departed from Ashtabula this morning for a 6-day deployment. The ODOT team includes highway technicians, mechanics, and managers from District 4 (Akron), District 11 (New Philadelphia) and District 12 (Cleveland).
“ODOT snowplow drivers and mechanics have been remarkable during this Christmas winter storm,” said Governor DeWine. “We are happy to help our neighbors in New York state and know that they would do the same for us in Ohio if the situation was reversed.”
The New York Emergency Management Agency made the request for personnel and equipment to the Ohio Emergency Management Agency via the Emergency Management Assistance Compact (EMAC) on Tuesday. EMAC is a national mutual aid system that allows states to legally share resources from state to state during declared disasters and emergencies.
The ODOT team is traveling along Interstate 90 to western New York and will receive their route assignments from local authorities once they arrive. Crews will work two 12-hour shifts and return to Ohio on Tuesday, January 3.
“The men and women of ODOT are the best at what they do. I know they’ll work hard to help our neighbors in New York. At the end of the day, we’re all Americans,” said ODOT Director Jack Marchbanks.
With a statewide fleet of nearly 1,600 plows, ODOT will maintain enough plows and drivers for winter operations in Ohio should the need for snow removal arise during the deployment.