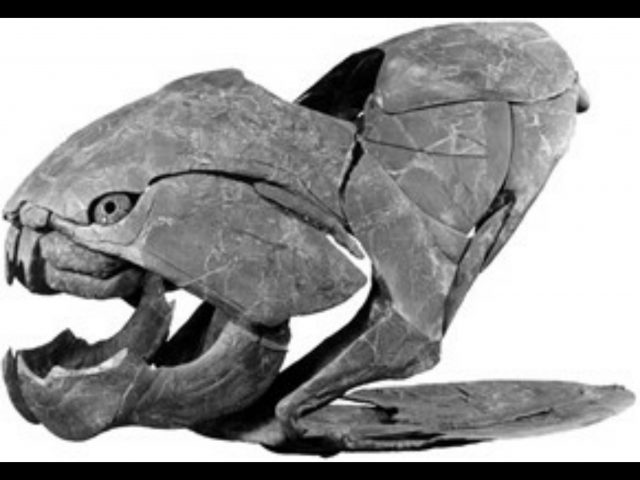 COLUMBUS, Ohio – Yesterday, Governor Mike DeWine signed Ohio Senate Bill No. 123 into law, officially designating the fossil fish species Dunkleosteus terrelli as the Fossil Fish of Ohio. It joins the ranks of other state symbols, such as the Ohio Buckeye (state tree) and cardinal (state bird).

Dunkleosteus is the second fossil animal and third geologic state symbol to be added to Ohio’s list. Previously, in 1965, flint was named Ohio’s State Gemstone. And in 1985, the large trilobite genus Isotelus, occurring in rocks exposed in southwestern Ohio, was named the State Invertebrate Fossil.

At an estimated length of up to 8.8 meters (29 feet), the fearsome Dunkleosteus terrelli was part of a now extinct class of armored fish called placoderms. It was an apex predator during the latter part of the Devonian Period, also known as the Age of Fish, about 360 million years ago. At that time, Ohio was located about 30 degrees south of the Equator and submerged beneath an inland sea.

Some of the world’s best fossil specimens of D. terrelli have been collected in Lorain County and Cuyahoga County from a unit of rocks that geologists have named the Cleveland Shale. Many of these fossils reside in the collections of the Cleveland Museum of Natural History, where a reassembled skull on exhibit has acquired the nickname “Dunk.”

The Dunk had been a contender for a state symbol designation since at least the mid-1980s, when a group of Dayton-area schoolchildren and their teachers had lobbied to name Isotelus the State Invertebrate Fossil. State senators Matt Dolan (District 24) and Nathan Manning (District 13) were the primary sponsors of SB 123. Supported by testimony from a twelve-year-old amateur paleontologist from Medina and representatives of the Cleveland Museum of Natural History and the Ohio Department of Natural Resources (ODNR) Division of Geological Survey, the bill passed with nearly unanimous support.

To learn more about Dunkleosteus terrelli and other prominent Ohio fossils, visit the ODNR Division of Geological Survey website at Fossils in Ohio (ohiodnr.gov).

ODNR ensures a balance between wise use and protection of our natural resources for the benefit of all. Visit the ODNR website at ohiodnr.gov.

Photo courtesy of the Cleveland Museum of Natural History.