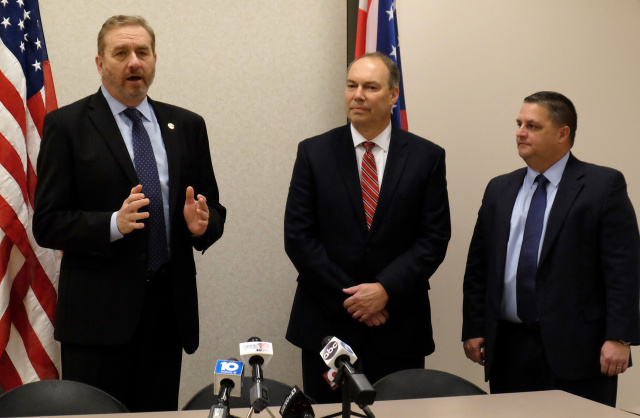 OHIO – Attorney General Yost filed a lawsuit to block the Biden administration’s vaccine mandate for employees of federal contractors, which will result in the release of dangerous ICE detainees being held in county jails across Ohio.

“We have sheriffs that are going to lose a lot of talented deputies to this mandate, and they’ll ultimately give up their contracts to house ICE detainees rather than see that happen,” Yost said. “Forcing that kind of choice on people who dedicate their lives to keeping our communities safe creates a needless situation in which everyone loses.”

“If our jails see no option but refusing federal ICE detainees, what happens to those detainees, who are prioritized for removal for committing heinous crimes in our communities and posing national security threats? None of us wants to find out,” Yost said. “That’s just one important reason why I’m suing to end this illegal mandate.”

Sheriff’s offices are not the only entities in Ohio with federal contracts, Yost pointed out, noting that the defense, higher education, medical and shipping industries also have them, as well as the State of Ohio itself. A simple online job search shows that many such industries are already desperately looking for workers to fill jobs vital to safety and commerce.

Nationwide, the Department of Labor reports, federal contractors account for about a fifth of the labor force. The coalition of attorneys general filing the lawsuit says the potential workforce loss poses a significant threat to state economies, as it could exacerbate ongoing gaps in the supply chain.

Beyond the issues of how all Americans would be affected by the mandate, Yost said, is the issue of federal overreach.

“I’ve said it many times: The Biden administration may not do whatever it wants however it wants,” he added. “The Constitution lays out critical rules by which the executive branch must operate. Congress and the states have their own powers, which the administration can’t just take over because it wants to.”

In the lawsuit, filed in U.S. District Court for the eastern district Kentucky, Ohio, the Bluegrass State and Tennessee maintain that the vaccine mandate is unconstitutional, in part because:

Other legal actions taken by Yost this year to stop federal overreach:

Also last month, Yost sued the U.S. Department of Health and Human Services to ensure the agency continues public integrity improvements to family planning clinics made in 2019. Those improvements required federally funded family-planning clinics to (1) be physically and financially independent of abortion clinics and (2) refrain from referring patients for abortions. Eleven other states joined his lawsuit.