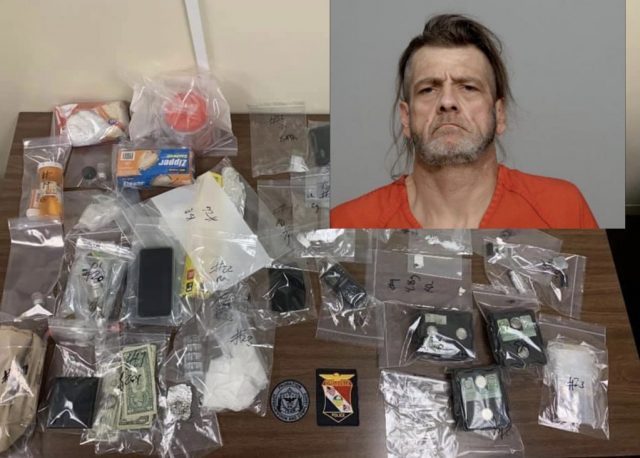 CIRCLEVILLE – Clifford W. Browning II was arrested and caught with 12 times the bulk amount of drugs today it’s not the first time he’s been caught with a copious amount of illegal drugs in the city.

According to police on April 21, 2021 at 1149 hours, Officers from the Circleville Police Department located Clifford Browning II at 128 West Ohio Street apartment C. After arresting Clifford for an active arrest warrant Officers observed evidence of narcotics activity in plain view in the apartment and a search warrant was requested for the residence.

Upon performing the search warrant Fentanyl, Methamphetamine, Crack Cocaine, Heroin, Marijuana, drug paraphernalia, and other evidence that narcotics trafficking had been occurring at this residence. In total 1 ounce of Methamphetamine was located, and 5.89 grams of Fentanyl was located in the residence.

Browning at the time was held on a probation violation because at the time of the bust in April he was on probation for violation of a protection order and was given a 12-month prison order that was suspended.

When he was caught with the above drugs and found in violation of his probation he spent a few months in jail but again was released on 7/30 under community control from Pickaway County Common Pleas.

This will be the second time Browning has broken his probation and community control orders, we will be following up with local courts to find out why he’s being allowed to run loose bringing in this amount of drugs into our county.