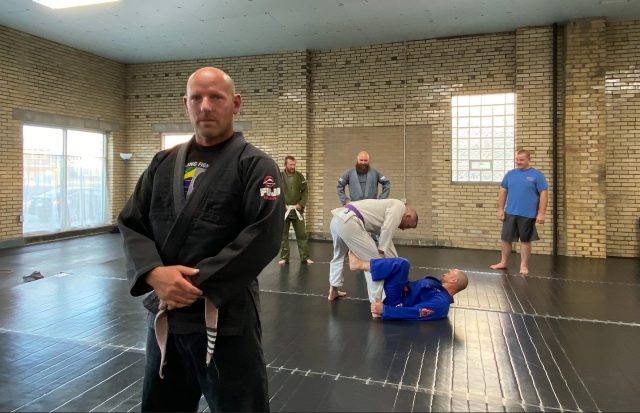 CIRCLEVILLE – A lifetime Pickaway county local has brought his passion for martial arts to the area opening up a center in Circleville.

Donnie Worthington of Ashville said that for years he’s been going out of the county for the things he loves and decided to start creating that community right here in Pickaway county.

Worthington grew up in the area, went to school at Teays Valley where he had an interest in wrestling, when he graduated he went into the US Marines, then became a Police officer for the City of Columbus.

“When I was in high school I was a wrestler, then in the Marine corps we were trained in grappling and hand to hand combat when I came out of the service I found Brazilian Jiu-Jitsu,” said Worthington.

Worthington says he’s been training now since 2006 in Martial arts and it’s helped him on the streets of Columbus but also when he’s off work. He is a Gold medalist in numerous BJJ competitions including the Arnold Classic,  Fuji Tournament, and Extreme Grappling Champion.

“Coming to the gym and practicing martial arts has been great for my mental health, being able to leave the job and concentrate on my art has me focused and trained to deal with situations that happen every day in my line of work.”

Worthington says that he’s taken his skills and trained other officers and friends and now it’s a comradery, “we get together and we train, its a stress reliever.”

“We trained in Grove City and we were always traveling out of the county for these services and we decided why can’t we just open something here? I talked to my Grove City instructor and he gave me his blessings to start something in the area, now we are open and offering the arts to kids and adults.”

Our kid’s classes are focused on fun while increasing their coordination, building self-confidence, and developing techniques.

During the Adult Classes, we will focus on learning control and techniques from beginner moves to more advanced skills, improving self-defense ability, improving both physical and mental health while building friendships.

“We offer family discounts and a monthly membership to come one day a week or four. Children’s membership is only 55 dollars a month for unlimited classes, adults are 65 per month. Family discounts reduce that even more.”

The gym is located at 121 East Franklin Street in Circleville Ohio, you can find out more information here: https://www.roundtownjiujitsu.com/?fbclid=IwAR0YSan04tjhwP8KrgjSqKfaaw0W_aegESIa5-52WdyXbBaSochHxgfWa9E

Brazilian jiu-jitsu is a martial art, combat sport, and a self defense system that focuses on grappling and especially ground fighting. Brazilian jiu-jitsu was formed from Kodokan Judo ground fighting fundamentals that were taught to Carlos Gracie by master Mitsuyo Maeda. Brazilian jiu-jitsu eventually came to be its own art through the experimentations, practices, and adaptation from the Judo knowledge of Carlos and Helio Gracie, who then passed their knowledge onto their family. BJJ promotes the concept that a smaller, weaker person can successfully defend against a bigger, stronger assailant by using leverage and proper technique, taking the fight to the ground – most notably by applying joint-locks and chokeholds to defeat the other person. BJJ training can be used for sport grappling tournaments and mixed martial arts competition or self-defense. Sparring and live drilling play a major role in training, and a premium is placed on performance, especially in competition, in relation to progress and ascension through its ranking system.