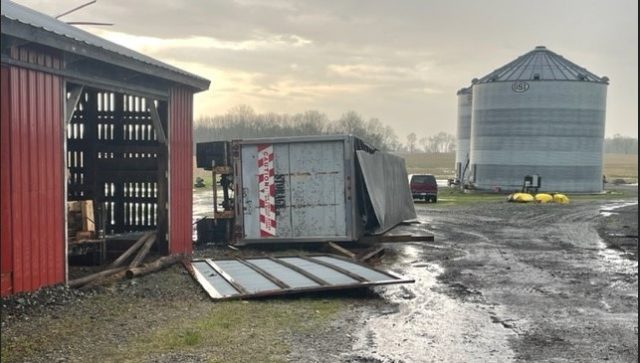 PICKAWAY – Sciotopost has received dozens of photos of the damage that occurred in NorthWest Pickaway County, Fayette County, and Fairfield county that caused thousands of dollars in damage to homes and structures.

EMA Director Gary Cameron released his report on the damage that occurred in the area.

“At about 4:45 pm, the Fairfield EMA notified us of severe storm damage along SR 674 north of SR 752. This is the dividing line between our counties and the storm damage that occurred in Pickaway County.

Upon arrival, I observed two utility poles snapped in half and debris in the roadway. Further north from the intersection, OSP Sergeant Cooper and ODOT were in the process of removing fallen trees, limbs, and debris from the roadway. South Central Power crews were arriving at the area and assessing the damage. SCP stated that it will take much of the night to repair and restore services.

Most of the moderate structural damage occurred at 305/385 SR 674. The unoccupied farmhouse. There was no need for immediate assistance as the house is not occupied.

South Central Power crews asked for traffic control assistance while they waited for more SCP personnel to arrive. I assisted Sgt. Cooper in closing the northbound lanes temporarily for the safety of the line crews.

ODOT effectively cleaned the roadway and intersection of debris.

At 5:52 pm, I contacted the Sheriff’s dispatch and at that time, no other significant storm damage had been reported.

At 6:40 pm, I contacted the National Weather Service. They were aware of the storm damage and would access the damage

According to Gary Cameron – Director of Pickaway County EMA, the National weather service reported that the damage along 674 in North West Pickaway County was consistent with straight lines winds, not tornadic activity.