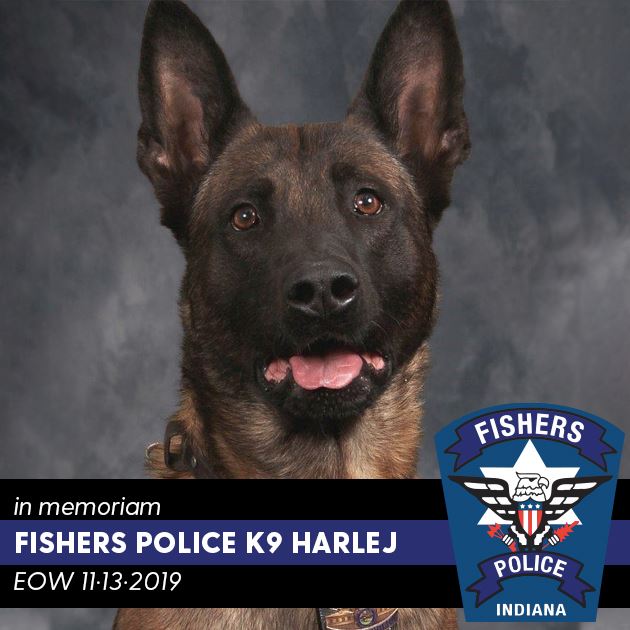 Shortly after midnight a Fishers police officer attempted to stop a Cadillac passenger car traveling northbound on Interstate 69 in Fishers. The driver refused to stop and exited the interstate onto Southeastern Parkway. A pursuit of the suspect vehicle terminated near the intersection of 131st Street and Olio Road. The male driver ran from the car while the female passenger was taken into custody. Officers established a perimeter and an extensive manhunt began.

During the search a Fishers K9 Officer observed the male suspect. When the suspect refused commands to stop, K9 Harlej was deployed. Shortly after, the officer heard a gunshot and K9 Harlej went missing. After several hours the male suspect was taken into custody. The suspect was transported to an area hospital where he received medical treatment for a minor leg injury. Both suspects were transported to the Hamilton County Jail without incident.

A short time later, officers found K9 Harlej in a wooded area. During his pursuit, of the suspect, K9 Harlej was shot and succumbed to his injury.

Possession of Marijuana “B” Misdemeanor

Unauthorized Entry into a Vehicle “B” Misdemeanor

Possession of a Handgun without a License “A” Misdemeanor