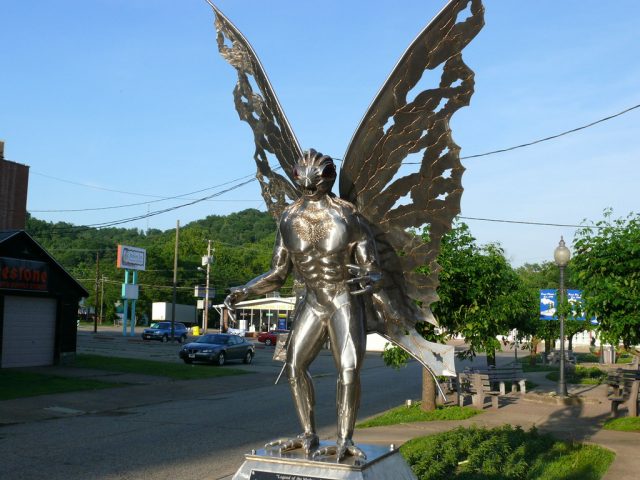 People from all over the world gather around Main Street to celebrate their favorite cryptid during this one-of-a-kind event.

The Mothman is a humanoid creature reportedly seen in Point Pleasant Virginia reported as a “man-sized Bird.” The history is written in a West Virginia newspaper that recounts the first sighting:

“On November 15, 1966, two young couples from Point Pleasant—Roger and Linda Scarberry, and Steve and Mary Mallette—told police they saw a large grey creature whose eyes “glowed red” when the car’s headlights picked it up. They described it as a “large flying man with ten-foot wings”, following their car while they were driving in an area outside of town known as “the TNT area”, the site of a former World War II munitions plant.”

That was the first sighting but weirdly over the next ten days, other people reported similar sightings in the area. These weren’t just people who were creating a story but people who had responsible jobs, two volunteer firefighters, and a Contractor who shined a light on the creature, and its eyes, ” glowed like bicycle reflectors”.

Many wanted to blame the Sandhill crane a large migratory bird that heads south this time of year, but the legend grew. More sightings were recorded and the Mothman made his/her place in history.

In 2002 Point Pleasant held its first Annual Mothman Festival, and embraced the story bringing thousands into their town. The town even erected a 12-foot tall statue of the mysterious creature for visitors to enjoy.

SInce 2002 the festival has grown more and more, this year guest speakers, TNT bus tours, Ghost Busters, Star Wars, and of course the Mothman Museum. The event is slated for 9/17 AND 9/18 where it all began in Point Pleasant West Virginia. More info can be found here: https://www.mothmanfestival.com/

Cameron Jones Contributed to this article