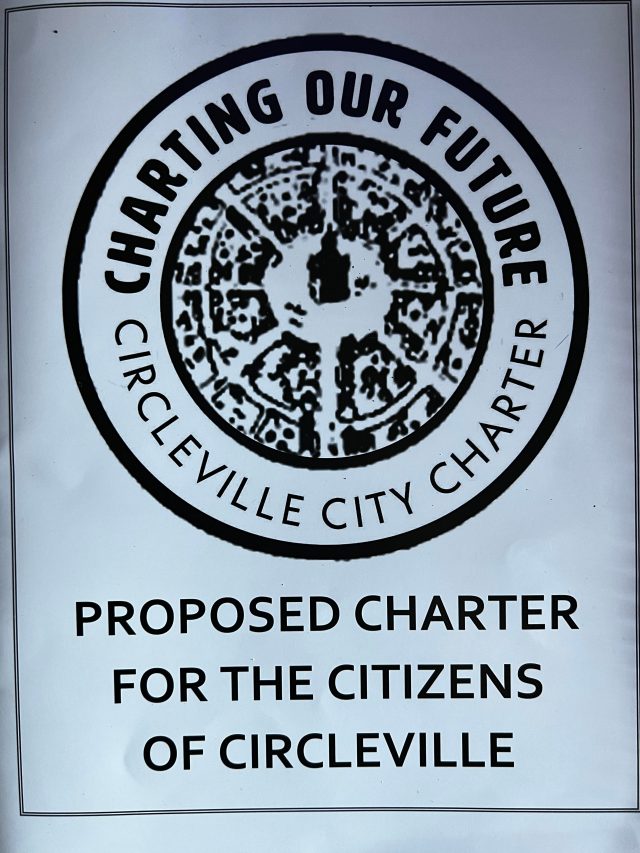 CIRCLEVILLE – From time to time we receive letters to the editor about local topics, this is one of those letters.

I have been working the post several weeks to learn all that I can about this Charter. I am, like many of you, simply a citizen. I am not a politician and I have nothing to gain by this failing, I will be offered no position in the city.  I will not benefit in any way other than the fact that my property taxes and personal and real property taxes will not go up. I am not related to anyone on council or the disbanded charter commission. They cannot say the same.  From what I have been able to find and with all due respect to the hard work of the commission, out of the 14 members of this commission it appears that 8 of them are related to either each other or the council. They will tell you they ran and got elected, and they did get elected. But, a question that I have asked and have not had an answer to is how did they get on the ballot unopposed? Only one of them that I am aware of had opposition and that was Bob Bensenhaver. How does that happen?

Additionally, the official Charter Commission has been disbanded and now they are nothing but citizens just like me. This is one of the many issues I have with this Charter.

In the meeting this week the City Council more than once stated that the email for questions is “voteyescircleville”, it kind of makes one wonder why the council who represents us as citizens is supporting a paid for political action committee and if that isn’t a conflict as Caryn Koch-Esterline in council can say that anything is a conflict or that answering questions is a conflict but this is not.

This council received this charter on or about April 12th, 2022. But as of July 5th,  3 of them had not even read it, have the rest of them? The deadline to register to vote is July 5th so they mailed it out (or maybe the political action committee did) on July 2nd only to registered voters. To some this may seem like a problem, but I say why not to all citizens so that people who disagreed with it could have the opportunity to register to vote? Additionally, it could have been put on the November ballot. I don’t know what they were thinking, but I can guess that it was done because we all know that primary elections get lower voter turnout and lower turnout equals issues passing. It was also over the 4th of July weekend, in my opinion, because people were busy and having fun with their families. There is no reason why this couldn’t have been put on the November ballot and people given a fair amount of time to read it and understand. Those not registered didn’t receive one and only got one day to register if they did happen to see it. Questionable to say the least.

By now we all know that they used over $18,000 of taxpayer dollars to print the booklet out that the first few pages are an actual endorsement of the political action committee. Since when do taxpayers pay for endorsing campaigns for anything? This is our money, not theirs. Does anyone need new tires because of the horrible roads in this city?

In section 2.01-2.09 of the charter councils term limits are 4 years but staggered which makes it all but impossible to get them all out at once if they don’t do what WE THE PEOPLE want and need. All power is theirs and the city managers.

In section 3 we pay for copies of votes on legislation (so we know what they are doing) but there is no mention of price.

Section 3.04 it says “effective immediately under #2 that annual tax levies for current expenses” among other laws.

In Section 4 we pay a mayor to do ceremonies at the pumpkin, show in a nutshell. He has zero power.

In Section 5-7 they still have not told us how much the three new hired positions pay with benefits included. There are no limits at all.

In this charter they talk about taxes, but they do not have a balanced budget clause leaving them free to do what they want. So 7 people can annually raise over and above state taxes of 10 mil without accountability to us. Deficits without the balanced budget clause means they can continue to fund favored projects which creates the need to raise taxes. They say the city manager brings in money, but they don’t say from where this money comes. A total of 69 municipal bankruptcies have had filings since 2010. Additionally, Circleville is the 16th HIGHEST PROPERTY TAXES IN THIS NATION!

There actually is a mention of police and fire, which Mr. Spring failed to mention and the truth is, with this charter they could be defunded at anytime. Again, their answer is just because it says it doesn’t mean it will happen.  But, IT COULD!

It will be 2028 before anyone reviews this charter to see how it is working. The yard signs were donated to the PAC and at least one of the council donated to that PAC, if not all.

Finally, if there is no conflict of interest, why does the city keep pushing people to an email encouraging you to pay higher taxes and give them 4 year terms by voting yes? The city of Circleville is 16th highest in taxes in the United States.

I say VOTE NO to this suspicious behavior and if they want law changed, then let them get it written by actual legislators!