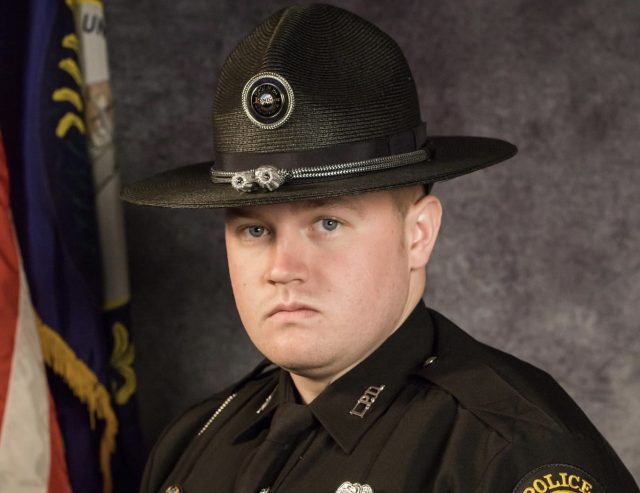 London Police Officer Logan Medlock was killed early Sunday morning while on duty when his cruiser was hit by a suspected drunk driver.

Ofc. Medlock died at the scene of the accident, which occurred at 12:49 a.m. at the intersection of South Main Street and Ky. 229 in front of O’Reilly Auto Parts.

Preliminary investigation by the Kentucky State Police indicates that a 2022 Ram pickup operated by Casey P. Byrd, 36, of Oneida, Tn. was traveling north on Ky. 229 when he entered the intersection and T-boned Ofc. Medlock’s 2019 Dodge Charger, his patrol unit. His shift started at 6 p.m.

The force of the impact knocked both vehicles into the A.R. Dyche Cemetery, damaging several headstones. The intersection was closed for most of Sunday morning while the KSP Critical Incident Response Team reconstructed the accident.

Byrd was not injured in the accident. Alcohol is suspected to be a contributing factor, the KSP said. Byrd was charged with murder of a police officer and operating a motor vehicle under the influence with aggravating circumstances. He was lodged in the Laurel County Correctional Center.

Ofc. Medlock, 26, joined the London Police Department in August 2019. He was the son of LPD Assistant Chief Randy Medlock.

“Logan was an outstanding police officer,” said Police Chief Travis Dotson in an emotional statement Sunday morning. “We are heartbroken. I want to thank KSP and the Sheriff’s Office for stepping up and helping us at this time.”

Chief Dotson said the department is in “a horrible time of shock and disbelief. It’s a great loss for this community, and we will never forget.”

LPD Officer James Williams went to the police academy with Ofc. Medlock and both were hired on at the same time in 2019.

“He was always willing to help people,” Ofc. Williams said. “He was motivated and dedicated to protecting the public. Being a police officer was all he wanted be, what he was meant to be.”

Prior to joining the police department, Ofc. Medlock worked at the Laurel County Correctional Center from June 2018 to August 2019.

“Logan was such a good guy,” Jailer Jamie Mosley said. “He was so humble and kind. This is absolutely unbelievable.”