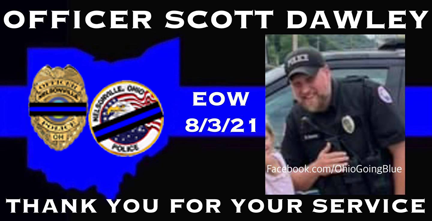 COLUMBUS, Ohio)—In honor of the life and service of Nelsonville Police Officer Scott Dawley, who died Tuesday, Governor DeWine has ordered that the flags of the United States and the State of Ohio be flown at half-staff upon all public buildings and grounds throughout Athens County, as well as at the Ohio Statehouse, Vern Riffe Center, and Rhodes State Office Tower in Columbus.

This order is effective today and will remain until sunset on the day of his funeral. All other public buildings and grounds throughout the state may fly the flags of the United States and the State of Ohio at half-staff at their discretion for the same time period.

More on how this officer lost his life in the line of duty here: https://www.sciotopost.com/breaking-news-nelsonville-oh-serious-three-vehicle-crash-nelsonville-officer-killed/