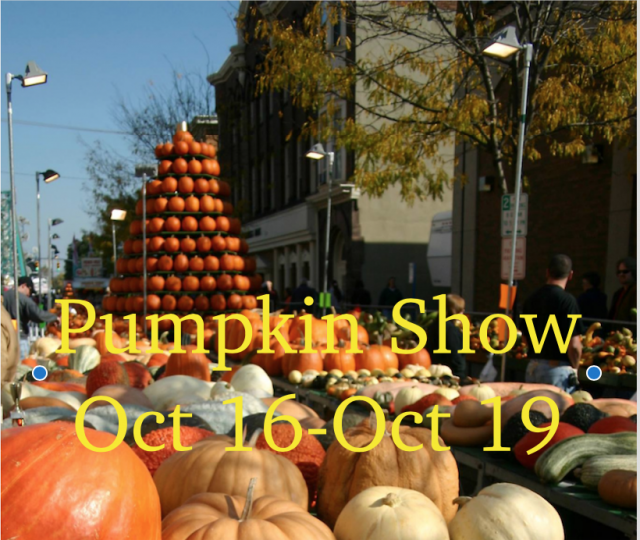 CIRCLEVILLE – Pumpkin show is only one month away! How exciting is that for Circleville?

Thousands of people will come from all over the state and from other states to take part in our 2019 Pumpkin Show. The Circleville Pumpkin show is a annual event that showcases and celebrates Pickaway county’s agriculture. Not only is there massive pumpkins but also squash, watermelons, and giant pumpkin pies.

The four day event boasts a 400,000 attendance that is still free to enter, Pumpkin Show inc claims its The Greatest Free Show On Earth.

Pumpkin show begins every third Wednesday of October and lasts until the following Saturday. This year that’s October 16th to 19th. secret: locals have enjoyed for several years now a tuesday night preview night adding a 1/2 extra day of pumpkin.

In October of 1903, Mayor George Haswell decided to hold a small pumpkin and corn exhibit in front of his store in downtown Circleivlel to celebrate the yearly harvest. Because of Pumpkins being the prominence of his first exhibit “The Pumpkin Show” was coined. This caught on quickly and by 1905 several local merchants had joined in the fun and it grew into what it is today. Parade of Bands

Some of the traditions that have made the Pumpkin Show what it is, are the themed pumpkin flavored pumpkin donuts, pancakes, burgers, ice cream, cookies, fudge, brownies, cream puffs, waffles, pumpkin seeds, and pumpkin pie! You can purchase just about anything pumpkin flavored at the show. Lindey’s bakery famous for Pumpkin donuts will cook the annual “worlds largest” pumpkin pie. Another long standing tradition is the Little miss and miss pumpkin show Queen. A total of seven parades will march down main and Pickaway Streets.

For more information in The Pumpkin Show click here for the official site. PUMPKIN SHOW