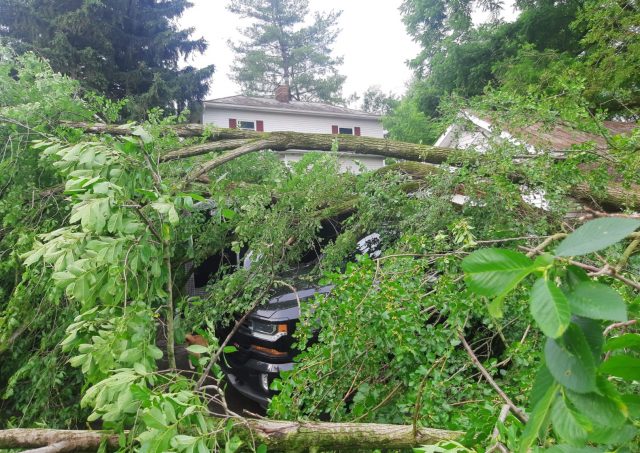 The Storm caused moderate damage to homeowners Wade and Lisa Swickard on Front St. The storm woke them up around 1 am and they realized the electricity went out. At the time they didn’t notice any damage. It wasn’t until daylight when they discovered a tree in their side yard had fallen across an electric line leading to their home and ripping the electric meter base and Weatherhead from the home. The tree also landed on two of their cars and a cargo trailer.

Scioto Twp Fire Dept responded at 7 am when the damages were discovered. No injuries were reported.

During the peak of the storm, South Central Power reported about 10,000 customers were affected. As of 11 am approximately 3,800 are still without power.

A representative of South Central Power said to treat all downed electric lines as being energized and extremely dangerous. Keep all people away from the area and call 911 and then call the electric company. He also stated that additional electric contractors were dispatched to assist with restoration to all of their customers.