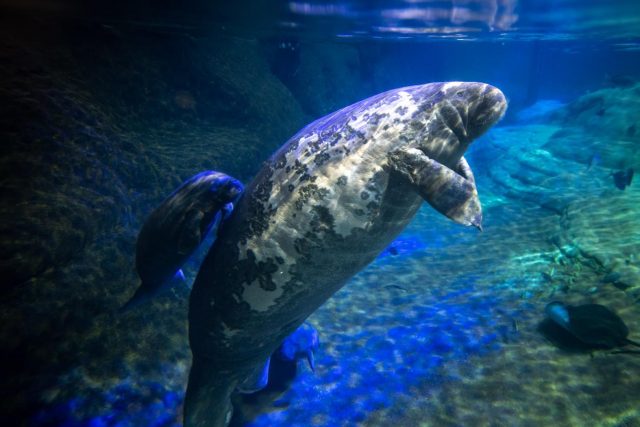 Powell, OH — The Columbus Zoo and Aquarium welcomes two young manatees, Scampi and Squirrel. They are the 32nd and 33rd manatees to arrive at the Zoo for rehabilitation since the Columbus Zoo joined the Manatee Rescue & Rehabilitation Partnership (MRP) in 1999.

The two female manatees both began their rehabilitation journey at the Miami Seaquarium before arriving at the Columbus Zoo early this morning, accompanied by a member of the Zoo’s Animal Care team and one of the Zoo’s staff veterinarians. Scampi and Squirrel’s arrival follows Monday night’s departure of manatees, Bananatee and Tostone, who completed their rehabilitation at the Columbus Zoo and returned to the Miami Seaquarium. There, Bananatee and Tostone will begin their final preparations to be released in Florida waters where they were initially found.

New arrival, Scampi, was rescued with her mother, Jumbo, on November 22, 2019. Sadly, Jumbo passed away due to her extensive injuries from a boat impact wound. After receiving care and gaining some weight at the Miami Seaquarium, Scampi is now estimated to weigh around 200 pounds, which is still small, considering that adult manatees can weigh over 2,000 pounds.

Squirrel was found as an orphaned calf and was rescued on May 2, 2020. Upon her arrival at the Miami Seaquarium, she was placed in a pool with two other females in their rehabilitation center. She was able to nurse from them and ate lettuce on her own, which was an important accomplishment since she was very small when she was rescued. She now weighs 116.5 pounds but is still one of the smallest manatees who has ever arrived at the Columbus Zoo.

Scampi and Squirrel have joined the Zoo’s Manatee Coast habitat with long-term resident and fan favorite, Stubby. Due to Stubby’s extensive injuries from a boat strike, she is considered to be a conditionally non-releasable animal. Her condition is evaluated every five years to determine if she is ready or not to return to Florida, but it is unlikely that she will move out of this category. Instead, she has often voluntarily assumed the role of a surrogate mother looking after the other manatees. She has already taken a strong interest in the new arrivals, showing them around the habitat. While Scampi and Squirrel continue to adjust to their new surroundings, they will continue to have access to behind-the-scenes areas, along with Stubby.

“The Columbus Zoo and Aquarium is extremely proud to be a part of the Manatee Rescue & Rehabilitation Partnership program, through which we have assisted in the rehabilitation and release of over 30 manatees. This program exemplifies our organization’s mission to lead and inspire by connecting people and wildlife. Our team works hard to provide their expertise in assisting individual manatees and raise awareness with our guests about steps we can all take to help protect manatees and other aquatic species. While it’s always sad to see that more manatees require rehabilitation, it’s an important reminder that we all play an important role in conservation solutions. By visiting the Columbus Zoo and Aquarium and supporting these important programs, our guests are joining us in making a positive difference for manatees and other animals across the globe,” said Columbus Zoo and Aquarium President/CEO Tom Stalf.

As part of the MRP, the Columbus Zoo and Aquarium is a second stage rehabilitation facility that provides a temporary home for manatees until they are ready for release back to the wild.

The MRP is a cooperative group of non-profit, private, state, and federal entities who work together to monitor the health and survival of rehabilitated and released manatees. Information about manatees currently being tracked is available at www.manateerescue.org. The Columbus Zoo and Aquarium was the first program partner outside of the state of Florida and is one of only two facilities outside of Florida to care for manatees.

Manatees are at risk from natural and man-made threats. Some of these threats include exposure to red tide, cold stress, disease, boat strikes, crushing by flood gates or locks and entanglement or ingesting of fishing gear.

The Columbus Zoo and Aquarium plays a significant role in the recovery of this important species by participating with other zoos, aquariums and government agencies in rescue, rehabilitation and release efforts. Over the last five years, the Columbus Zoo has also provided more than $346,000 to research, education and protection of manatee species worldwide.