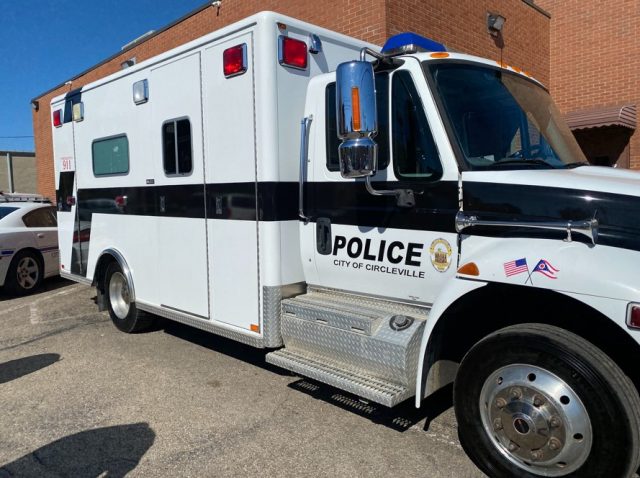 Circleville Chief Baer told Sciotopost that the mobile unit was bought new for the Circleville Fire department in 2004, then it was replaced with a grant this year. This ambulance was decommissioned as an ambulance because of some technical flaws so the police department was able to obtain it for free.

The department retrofitted the vehicle with equipment that they can use mobile, on the scene, and during large events like the yearly Pumpkin show.

“This command unit runs all communications that the main dispatch runs, high band, low band, CAD all of that can be run now mobility on scene. We can put a dispatcher in the back of this unit and go. It has the ability to charge radio batteries for long-term use on scene. SWAT situations, Meth Lab situations can be done in this unit. Evidence processing, crime scene equipment all can be housed here for on the go.”

The police department told Sciotopost that before this unit some of this equipment was transferred by cruisers and had to be loaded up during the event and then taken to the scene.

“We can use this for scene support like Box 65 has done for us in the past, we can also use it for training, We can now use this during touch at the truck for kids fingerprinting, We can roll up to a structure fire or a Motor vehicle crash and have people who were involved in the back of this truck where they can get out of the environment vs in the back of a police car. The uses for a vehicle like this that we can turn a key and go will help the citizens of Circleville for years to come.”

The cost of the ambulance was free to the Police department, they have spent some money on the retrofit, but they believe the little cost vs what they can use the mobile unit for will far outweigh what it will give back in service to the community.