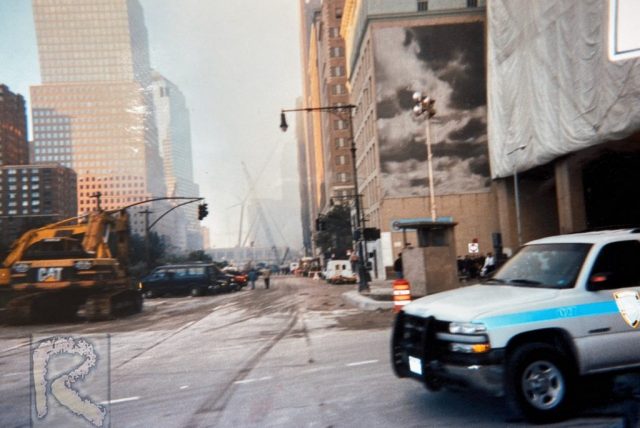 CIRCLEVILLE – “Things changed for New York after 9/11,” said Richie Verito a Brooklyn New York native, who owns the New York Deli in Circleville Ohio. “It wasn’t a big deal for us to spend the day in Lower Manhattan where the towers were, we worked there, we played there, shopped, we grew up, we made memories there.”

“Unknown to me American Airlines Flight 11 had already hit the North Tower. I opened the door in standard New Yorker, what do you want? The elderly man said your mom is trying to call you it’s an emergency. So I checked my cell and my caller ID and there were no calls. I went back to him and was like there are no calls on my phone. That’s when he started going into trying to explain what was wrong, but it wasn’t coming out right, and he said, just turn on the TV.

I turned on the tv and we were getting live views of the North tower on fire, it was shocking, as I watched I saw at 9:03 am United Flight 175 hit the South Tower.

“Wholly crap what’s going on I said, then I was instantly worried because my sister worked in the Wall Street area that’s close to the towers, and we are under attack. It took me a minute, for it to completely sink into what is going on. We always felt at risk of a bombing after the first attack of the world trade center in 1993, we heard rumors of possible bombings in the subway tunnels or bridges throughout the years, but it was just something you heard.

Lower Manhattan was shut down, the subway, the streets, the bridges everyone who worked down there, thousands, now were on foot. Later we found out my sister walked across the Brooklyn bridge along with thousands of people in suits, and business attire covered in dust and soot to escape the situation.

After the buildings came down, I thought about what happens next, how do I get around, how do I get to work, if there is work, what trains are running, and whether are they safe.

Almost immediately people were on edge, you could just feel it, the uncertainty, rumors were bustling, and fear of more attacks.

Two days later, rumors spread groups of people were gathering to go to the Brooklyn Assembly member’s office to help load up vehicles with supplies that were going to ground zero. At the time everyone in our areas was doing this, giving mass supplies to the people who were working around the clock at ground zero.

Volunteers were asked to get into the vehicles to help unload when the trucks got to the locations where supplies were needed. As many people who could fit in the trucks went. I got put into a vehicle with strangers, just other New Yorkers who had come to give help to the cause.

As we were leaving we were told that we were going directly to ground zero, that the supplies we had on our truck were needed at the main scene of the attack. Many of the other vehicles were heading to other points, we were the only truck to go there. They radioed ahead, and gave the plate number and other identification. There was a police escort, as we headed Downtown checkpoint after the checkpoint was opened for us as we drew closer to the scene.

When we arrived on ground zero we unloaded our supplies and one of the men in the group said we need to do more, and whoever was in charge made us sign some sort of paperwork that said who we were, and we were given hardhats, a respirator, a reflective vest, and a bucket. We were removing rubble, and parts of the building we were picking up. I all of a sudden became part of the rescue efforts.

I remember having to walk through the window of a building and out the other side to get across the street because there were large pieces of the Trade Center that was too tall to climb just in the middle of the road. We were instructed to become part of a bucket brigade that was filling buckets of rubble and handing it down in a chain gang fashion uncovering the scene. There were several cadaver dogs in the area looking for survivors.

When we moved up on top of the rubble a moment ill never forget as I looked up across the West Side Highway and the corner of a building about twenty stories up had a large chunk of the world trade center stuck sideways in the building. Windows were blown out of buildings, and chunks of other buildings were just gone.

I realized it is around noontime and it was silent in Lower Manhattan, it’s never quiet in this area, ever. It was a surreal moment one that I remember like it was yesterday, I said, where am I, even though I knew where I was, I’d been there a million times, It was like the depths of hell. I felt like I was in a movie, but I knew it was real. I remember being called off the scene a lot due to the structural integrity of the buildings around us because not all the sructures were down yet.

Richie told us that he hasn’t ever returned to the scene, but he told us that New Yorkers went on afterward, “that’s what they do,” he said, “but that’s what we all had to do across America, we had to keep going.”

“I’ve been back to New York and Brooklyn where I grew up, but not downtown because I’ll never get that image of what was there, and what it was out of my head. The memories of us as kids going up the Towers going there in grade school as a class trip, then seeing it in rubble brings back too many memories I don’t want to deal with.”

On September 11, 2977, people died that day and 19 hijackers committed murder–suicide many were never found in the rubble that Richie described. A full list of the names can be found here: https://www.sciotopost.com/371727-2/