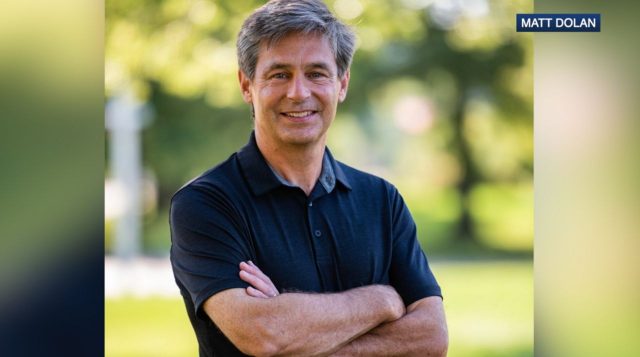 OHIO – Ohio Senator Matt Dolan has formally put his hat in the ring to run for US Senate, and Circleville Mayor Donald R. McIlroy, says he endorses him.

“I’m proud to endorse Matt Dolan in his bid for U.S. Senate,” Said Don Mcllroy, “His record of achieving conservative results for our region and state are impressive and his relentless focus on issues of importance to Ohio is refreshing. We need Matt Dolan’s experience, voice, and integrity in the U.S. Senate.”

We recently were able to sit down with Dolan to talk about his race and why he wanted to run. We asked the Senator about some of the history and about several charities he volunteered for before being an Ohio Senator.

“Being a public servant is knowing your community and getting involved in your community, and so I very much enjoyed that part of it. Unfortunately, sometime, a few years ago, before I won the state senate, they made a rule change that basically said you couldn’t really serve on nonprofit boards if you had a fiduciary duty. So I had to get off of those boards.”

Senator Dolan explained that being part of those local boards helps you get better at serving the people as Senator.

“It gets you out into the community, not as a politician, not as a public servant, just as a citizen along with everyone else, working on a common goal. You know, with the life act, it was teen suicide with Red Cross and was dealing with the emergency, whether it be natural, or fires, you provide the ability to help people. For me, what attracted me to it is the education system they provide for clothing, and in urban schools. So I like being part of that like being part of a mission to better people’s lives. You get to know people, learn from people, what makes them tick, what’s important to them. So that makes you a better public servant because that’s who you’re serving.”

I asked the Senator about the big win Ohio was just awarded the semiconductor company Intel that will commit 20 billion dollars to central Ohio. How if you were US Senator would you bring more wins to Ohio?

“Well, because I served in the state senate and Ohio house, I worked very closely with a number of officials at the federal level and all throughout the state. Getting to know the people at Jobs Ohio, and obviously knowing the people in recovery administration allows me to put forth policies that I think are in the best interest of Ohio and attracting companies. So part of what we did is work with Senator Bob Peterson and others on language and ultimately got into the budget that made Intel possible.

But there are also things that I’ve done that I think are more unique to me that made Intel possible. Intel needs an abundance of water. And I’ve been relentless in my focus to make Ohio, a water economy. Because water is a natural resource crisis. We don’t talk about it a lot in Ohio, because we have it. Go to Arizona, go to Florida, go to California, go to Utah, New Mexico, they talk about water all the time, because they don’t have it. So I want to say that is one of our great assets. And we need to market it. We need to make sure we know how to use it and bring companies and jobs and families here. Intel appreciated the amount of water we had because they need it.”

Well, why I want to do this. I really love working on public policy and making a difference in people’s lives. why I’m running for this race is because the next US Senator needs to be focused on Ohios needs to go to Washington, understand Ohio’s economic interest, understand the biosecurity risk, make sure we make people feel safe, understand the border issues, and United States standing in the world. Those are the things I’ve been working on. And those are, the issues I’m talking about, and fight for Ohioans. I’m unique in that Jeremy no one else can talk about conservative results that have made Ohio better. And no one is going to be made sure we get things done like me. Transparency, honesty, and consistency are very important as well.”

So the drug epidemic is a huge thing in Ohio. We seem to be throwing more and more money at it with limited results. What is your belief and fix for the overdose crisis?

Well, we have to face the reality that if we do not secure our border, these overdoses are going to continue because, in the last year alone, more methamphetamines and fentanyl have crossed the border. And it’s caused 100,000 deaths in the United States, and we’re feeling here in Ohio as well. So the drug cartels are using the border of the US to get their poison into Ohio. I’ve met with sheriffs all over the state, including the Sheriff of Pickaway county a couple of weeks ago, and it is real. It is here and we have to address it we have to go after the source. We have to stop the dealers here in Ohio, and we’ve got to create programs so people can get clean and stay clean from the drug.

So that’s what I would do in Washington is making a coordinated effort to secure the border. Stop it from coming over. Work with the state so that the prosecutors and the police have what they need to go get those dealers. I’m a former prosecutor so I know what they need, and then to make sure that the people get clean We need to get them off the poison and stay clean. If we take care of the demand, we will prosecute the supply and we can overcome these problems.

So another hot topic that’s out there is, of course, vaccine mandates and mass mandates. Where do you stand on those?

“I am against President, I’m trying to tell Ohio, Ohio companies that they should mandate the mandate on their employees. So I was thrilled with the court recognizing the overreach of the federal government and stopped it.”

What do you think about Biden’s build-back better Campaign?

Yeah, I’m against the Build back better plan. It’s not only pouring more money into the system already increasing inflation, but it is creating a dependent class. It is putting in programs that more and more people need to rely upon the government. And when you do that, you create dependency. And when you do that you hurt supply, we need people to get into the private sector to get that working. So that our excellent employers can make goods and services and they can flow again. And that’s how you curb inflation. But by allowing more government programs and funding more government programs, you’re doing just the opposite. And you don’t social engineer your economy. That’s not how it works. You rely on individuals with their entrepreneurial spirit, their hard work ethic, create jobs for people making a good living wage, and our economy booms when our economy, booms. People feel they can take care of their families.

So a lot of politicians, of course, put things out there. Can you tell me that, you know, what you say is what you do? What in your background? And the years that you’ve been in office Have you said what you would do and fulfilled it.

So, excellent question, because I’m the only one in this campaign who can answer that question. So I brought private sector experience to the legislature as well. So I knew both sides of the chat. I knew that a higher income tax was too high, that was a deterrent for our economy. So in my time in the legislature, income tax has gone down 48%. I know regulations are crippling companies. So we’ve reduced state regulations. I talked about water earlier, I authored the Great Lakes compact, which, working with the seven Great Lakes states and two provinces in Canada, it’s protecting our waters. And if you want our water, you’re bringing your business here. My time in the legislature abortions went down 30% Because I voted on 13 pro-life pills and actually became law, survived the attack by liberal parent Planned Parenthood and have done what we wanted to do to reduce abortions. So I’m the only one that can say these conservative results are what I want to bring to Washington and achieve the same results for the people of Ohio and the people of the United States.”

You can learn more about Matt Dolan here: https://dolanforohio.com/