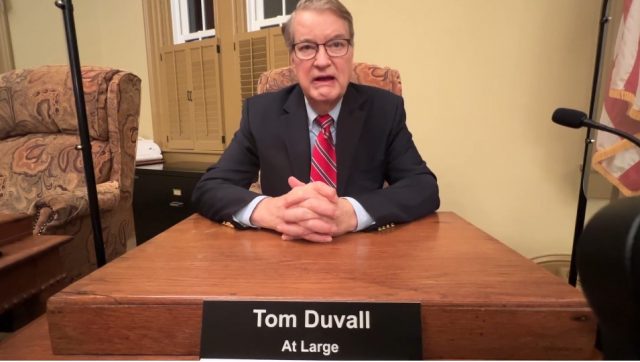 Circleville – Circlevilleperson at large Tom Duvall announced on Tuesday during the Strategic Planning Committee Meeting a resolution against Solar Farms in Pickaway County.

Duvall in his presentation reported that he had investigated the installation of proposed solar farms in Pickaway County near Circleville and came to the conclusion that Solar projects do nothing to benefit Circleville in terms of increased tax base or reduced electricity rates. He did say that in his research he found that there were several negatives.

The councilperson said that he was concerned with the chemicals used in the solar panels being lead and cadmium, cadmium being a toxic carcinogen.

Second, he reported that he’s concerned with fire from the panels. He noted a “Conditional opposition to New solar energy Development within Pickaway county” letter that was written by the Pickaway county fires chief association that noted that the fire department does not have the knowledge of the type of electrically energized fire and fighting methods needed to fight a large solar farm fire. Equipment to contain a fire such as one of these fires is not currently available, Chemicals thought to fight these kinds of fires are not stocked by the department, and if a large fire such as a solar farm broke out it would most likely pull a large portion of county resources leaving minimal coverage for other emergencies during the situation.

Third councilman Duvall noticed he was concerned with the groundwater contamination from the lead and cadmium discharge/leaching from the panels.

“When solar panels are damaged by fire, hail, tornado, and mechanical deterioration the aging solar cell the possibility of these chemicals leaking into a major aquifer, the Teays Aquifer that supplies the Circleville water supply wells and local large industries south of the city. a major incident could potentially poison the aquifer or even gradual leaching over time.”

Fourth along with the above concerns Duvall noted, “economic impact to Circleville Commerce by removing 10,141 acres from annual agricultural projection would result in 1,949,300 bushels of corn or 939,300 bushels of soybeans currently hauled to Cargill if all 10,141 acres are
planted in a single crop. In actual practice, it would be a reduced sum of each. The reduced throughput and associated Cargill profit and potential personnel reduction would negatively impact Circleville taxes. County crop proceeds would be reduced by $13,375,000 Farm income would be reduced by $3,307,000 Crop purchases of seed, fertilizer, equipment, etc. would be reduced by $4,960,000. Certainly, all of this commerce will not go to
Circleville, but it is reasonable to assume a major portion would be spent locally.”

The ordinance will go in front of the Circleville Council to be voted on at a later date.