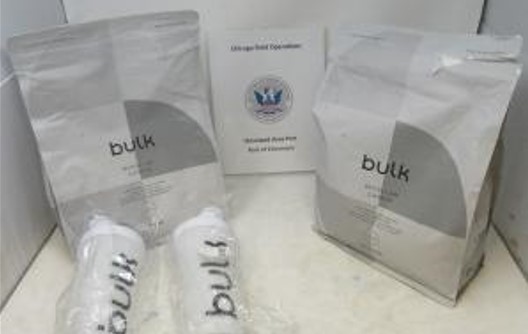 CINCINNATI–- On June 8, U.S. Customs and Border Protection (CBP) officers intercepted four shipments transiting through the Port of Cincinnati and destined to locations in Australia, Canada, and the United Kingdom.

After officers took a closer look at a shipment of cosmetics from Canada, they found it contained four vacuum-sealed boxes full of a white crystalline substance. Tests confirmed the powder was ketamine. Officers identified three additional suspect shipments containing packages of protein nutritional supplements that turned out to be ketamine. In total, officers seized 45 pounds of ketamine powder valued at $300,000. The shipments originated in Canada and the United Kingdom.

“Our officers are committed to keep our country and communities safe from illegal and dangerous drugs,” said LaFonda D. Sutton-Burke, Director, Field Operations-Chicago Field Office. “These seizures are one example of the quality enforcement work the officers do on a daily basis.”

Ketamine is a Schedule III drug used in both human and veterinary medicine to induce sedation, immobility, and relief from pain. It has recently been used by medical professionals for mental health and substance use disorders. Ketamine is abused for its ability to induce dissociative sensations and hallucinations, and has also been used to facilitate sexual assault. Typically, ketamine abuse occurs among teens and young adults at nightclubs and private parties. Overdoses can lead to nausea, irregular heart rate, muscle stiffening, unconsciousness, and respiratory failure leading to death.

“We value our relationships with our law enforcement counterparts worldwide,” said Cincinnati Port Director Richard Gillespie. “Prescription drugs are provided by practitioners for legitimate medical purposes, but transnational criminals exploit dependencies and addictions to sell their illicit goods. Our officers are trained to identify shipments that contain these potentially dangerous substances, and will continue to work to keep private citizens and their families safe.”

As the largest federal law enforcement agency in the United States, CBP has a vast, complex, and dynamic mission faced with constantly changing threats. By being continuously watchful and alert, CBP is dedicated to facilitating lawful trade and travel and protecting the homeland and its people.