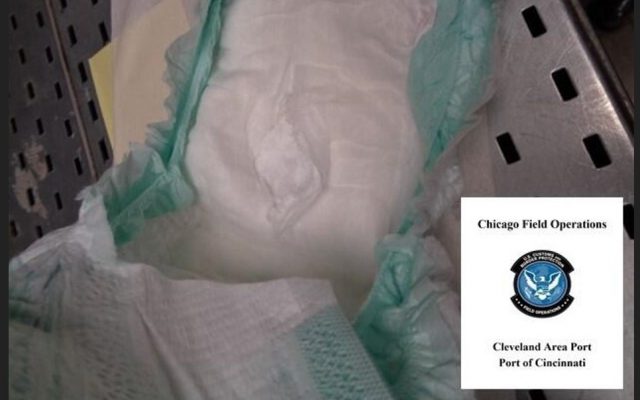 CINCINNATI—On November 11th, U.S. Customs and Border Protection (CBP) officers in Cincinnati intercepted smuggled narcotics in a shipment of baby diapers from Texas enroute to Australia. The shipment contained over 4 pounds of methamphetamine concealed within the diapers. The diapers appeared to be firm and unusually heavy.

CBP Narcotic Detector Dog “Betty” was working freight and alerted to the shipment of diapers. The diapers were destined to a private residence in Australia. The shipment contained bags of plastic wrapped baby diapers. Officers tested the material inside the diapers, which were identified as methamphetamine, a schedule II Narcotic.

“Our officers are committed to keeping our country and communities safe from illegal and dangerous drugs,” said LaFonda Sutton-Burke, Director, Field Operations-Chicago. “This seizure is one example of the quality enforcement work they do on a daily basis.”

Cincinnati Port Director Richard Gillespie highlights that Smugglers will hide narcotics stashed inside anything and everything. In this case, “dirty” baby diapers loaded with methamphetamine. “The Port of Cincinnati officers are taught to look outside the box when looking for narcotics and they do a wonderful job finding those illegal shipments” CBP encourages legitimate trade and travel to and from of the United States.