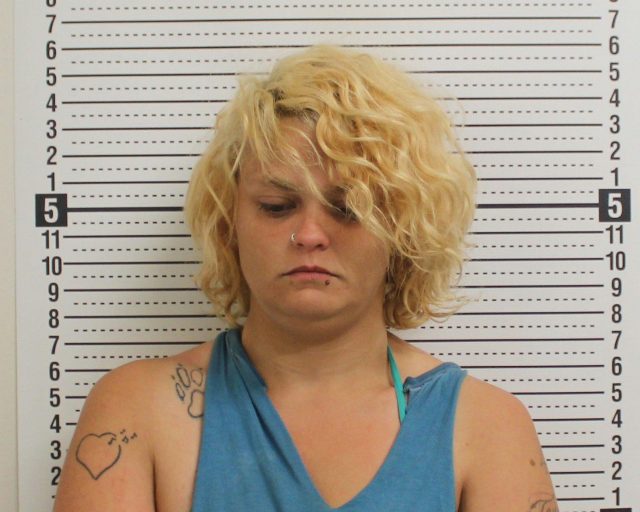 Chillicothe – A woman was arrested and now charged with more offenses after refusing to be taken into custody for a warrant.

Accoridng to the Chillicothe police department they were called to the area of 1000 block of Akron street after a homeowner made a complaint of someone setting up a tent in her backyard.

When police arrived on the scene they found a man sleeping in the tent and when told to move on he said he would do so, interaction with a female on scene identified as Gretchen Skaggs who had a known warrant through Adult probation. When attempting to be taken into custody she refused.

Officer told Gretchen to stop walking away and that she was going to be detained. Gretchen did not listen to the lawful orders she was given and continued walking away from the officers. Officers went to detain Gretchen who started to pull away and continued trying to walk away. Gretchen dropped her weight to the ground where she continued to resist by pulling her arms away and rolling around in the yard. Gretchen was advised by officers to stop resisting multiple times and that she was being placed under arrest. Gretchen refused to place her hands behind her back. Gretchen continued trying to pull her arms away and rolling around. Gretchen was
also kicking her legs at officers and trying to scratch them with her fingernails. Officers were able to gain control of Gretchen’s left arm and secure it with handcuffs. Officer Steele gained control of her right arm and placed it behind her back and it was then secured as well with handcuffs. Gretchen refused to walk on her own and had to be carried at times
back to of the patrol car.

Gretchen will remain at RCJ on charges of Obstructing Official Business and Resisting Arrest. She was also held on her Probation Violation for Aggravated Possession of Drugs in the Ross County Court of Common Pleas. Gretchen will have initial arraignment on June 16th 2022 at 09:00 am in the Chillicothe Municipal Court.