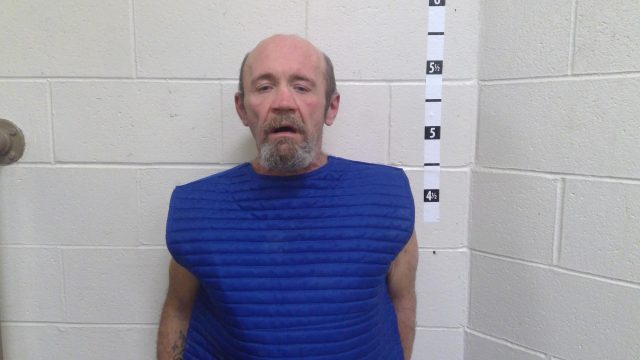 CHILLICOTHE – A man was arrested for an active warrant, after being arrested he attempted to flee because of his dog.

According to the Chillicothe police department while on patrol, they observed a subject who was known to have an active warrant. The suspect was placed under arrest and he stated his dog would be alone and he had no family to take care of it. The police officer placed the man in the back of the cruiser after the search revealed a drug pipe and everything seemed calm until the officer told the suspect that the Ross County Dog Warden Llyod Caldwell was dispatched to the scene to take the dog to the pound.

The suspect identified as David Sowers, 48 of Chillicothe became enraged that his dog was being taken to the pound and started to hit his head and kick the door. That’s when another officer stepped in to try to calm the suspect by opening the back door and attempting to stop the self-harm. In the report, the officer captures the incident.

While assisting Officer Lee in reference to a Warrant arrest. While on scene at 427 E 2nd St I was standing by for scene security when I could hear David begin to thrash around and bang his head on the partition and the hard plastic seat. For his safety I went to the rear of the patrol vehicle and opened the door. Just as I opened the door David with both feet kicked the door open causing me to jolt back and stubbing my ring finger on my left hand. I immediately recovered my balance and grabbed David by the chest of his shirt and was trying to push him back into the vehicle.

While I attempting to do this David was kicking his legs, striking my thighs, knees, and shins. David then slid forward and was completely out of the patrol vehicle. I continued pushing David back into the vehicle when he stood up and was using the vehicle as leverage keeping himself from being placed back in the vehicle. During this time David made multiple attempts to bite my left hand. David was close to seceding causing me to place my hand on his face, pushing his head to his left. I advised David if he didn’t stop and get into the vehicle he would be pepper-sprayed. David failed to follow orders and continued trying to push his way past me. At that time I then sprayed pepper spray on the forehead and eyebrow area of David causing an immediate reaction. While doing this I observed the splatter of the pepper spray coming back toward me and got into my right eye and on the right side of my face.

After seeing the reaction of David I use that to my advantage and was able to get him back into the vehicle due to him bending at the waist. David was halfway in the vehicle and with the assistance of Officer Lee we were able to secure him in the vehicle.