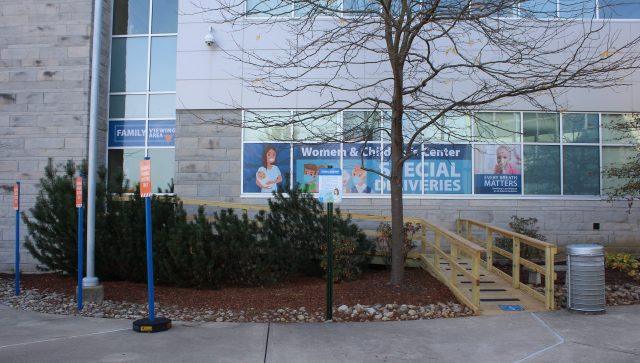 Nobody wants to see Grandpa Joe climbing a ladder or Aunt Helen perched atop a wobbly chair outside the windows of Adena Regional Medical Center’s Women & Children’s Center trying to get a glimpse of the latest addition to their family.

A version of those scenarios is what has played out, however, outside the windows of patient rooms where mothers have been bonding with their newborns since precautionary visitor restrictions were imposed due to the COVID-19 pandemic.

Prior to Coronavirus, an expectant mother could have up to five visitors at a time while in labor and delivery and an unlimited number of visitors once moved into the mother/infant rooms after giving birth. Once the virus became a factor, expectant mothers were permitted one support person – a spouse, significant other or another family member, for instance – during labor and delivery and for the remainder of their hospital stay for safety measures.

The change in protocols produced a considerable and concerning change in the behavior of some families.

“We were seeing that families were attempting to view babies through the (patient room) windows in maybe not the safest manner because the windows on the outside aren’t level with what’s on the inside – so they would have a chair or a ladder or some other type of item that they would just have in their car and they were trying to stand on it and look in the window,” said Tasha Turner, nurse manager of pediatrics and the nursery. “We were really concerned someone was going to get hurt. (It was happening) almost every day.”

While safety was a critical part of the problem, it wasn’t the only concern.

“They were usually trying to look into a patient room, which also could lead to its own issues if they went to the wrong window and looked in on somebody else’s family, and we definitely don’t want those kind of things either,” Turner said.

The challenge was to find a way for families to safely view their newest loved one without having to enter the ward to do so.

“We discussed how we can allow families to see the new baby because we know that’s important to families, so we started thinking about is there any area that is easily accessible?” Turner explained. “Because of infant safety, there just aren’t a whole lot of places where it’s safe for somebody to view a baby. We have some doors, but if you get a baby too close to one of our doors, it will set off our alarms because that’s how we keep them safe so somebody’s not taking a baby.

“So we really just walked around our unit and thought where’s a good place where you could look at a baby and then we found this one area out in Mother/Infant — it’s a large window facing out toward the parking lot, and we thought if we could do something to make the outside area (leveled) up to the inside area, then we would easily be able to have the family look in at the baby.”

The result is a newly constructed wooden ramp leading to a platform outside that window just off the northeast corner of the hospital. With signage and guidelines posted, families are able to schedule a time to stand on the platform and look at the new baby resting in a crib by the window. Times will be arranged between the new mothers and their family members, then ward staff will be informed when times are confirmed.

“We want to make sure, especially at the beginning, that we’re keeping an eye on that area to make sure they’re doing it in a safe manner,” Turner said. “We don’t want moms picking up the baby to show them because we’re a little bit worried about babies being dropped. We made the viewing area in a manner that somebody can come up to the window and see the baby in a crib, they don’t have to pick the baby up out of there.”

Keeping ward staff in the loop on scheduled times also will help prevent a backlog of families from congregating outside the viewing area during periods in which the ward is handling a large number of births. When multiple families are awaiting a turn on the platform, social distancing will be observed between families and a time limit of 15 minutes at the window will be in place.

With the platform now in use, security will be asked to monitor activity around it “just so they can check and make sure people are using it safely and that people are not going back to the old ways because we have this new way for them to do it that’s safe for everyone,” Turner said.

The platform is the latest example of the type of out-of-the-box thinking about patient-centered care – in this case going beyond patients themselves to include their extended families – that helped earn Adena a spot this summer on Newsweek’s 2020 list of Best Maternity Care Hospitals. Only 231 hospitals across 36 states were selected to receive the honor.