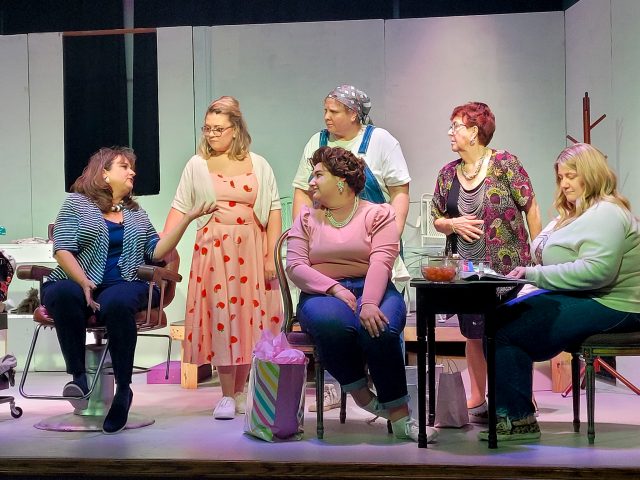 Chillicothe Civic Theatre, located at 83 East Walnut Street, opened their production of Steel Magnolias last night. The audience laughed and cried along with the actors as this tale of hair, marriage, and the hardships of life unfolded onstage. Director Vanessa Myers-Dudley warned, “Bring kleenex.”

When asked for a favorite quote from the show, Myers-Dudley said, “We all kind of love “laughter through tears is my favorite emotion,” but we have all had some laughter and tears through this whole process…and become our own group of Steel Magnolias with some honorary Magnolia men.”
Assistant Director Kristin Rusk added, “We had a first-time director, first-time assistant director, and a first-time stage manager- all women.”

Steel Magnolias takes place in Truvy’s Beauty Salon in Chinquapin, LA. The play is based on the hilarious and heartwarming conversations of the ladies in the story. It’s clear that this troupe has created a bond during their seven-week rehearsal period and it can be felt in the chemistry between the actors onstage. Cast member Maddie Winland (ANNELLE DUPUY-DESOTO) said, “I am having an amazing time with this cast. They are incredible women who are hilarious, smart, and kind. This experience has given me so many new friends!”
Hannah Strouse (SHELBY EATENTON-LATCHERIE) said, “It’s been so nice to be back after a hiatus during Covid, especially since this cast is like a family and has been since day one. Shelby is a character I happily feel at home in.”

Not many folks know that Steel Magnolias is based on a true story. Writer Robert Harling had a sister who passed from complications similar to the character Shelby’s situation in the play. She passed shortly before Harling wrote the play script and the film script.

Tickets can be purchased here: https://cctoh.booktix.com