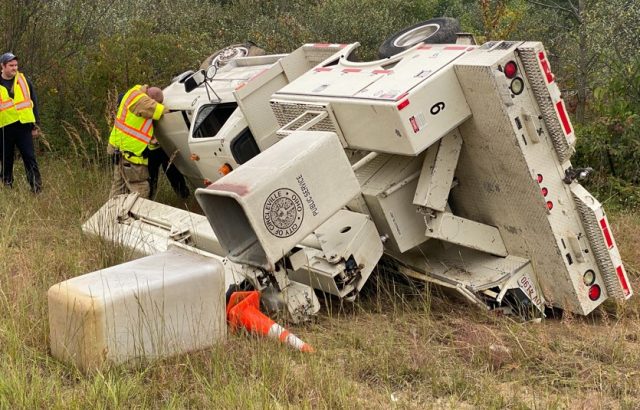 PICKAWAY – First responders are on the scene of a commercial vehicle rollover in the location of SR-361 and US-23 Southbound around 9:20 am.

According to reports the rollover only involved one vehicle and the driver is out of the vehicle complaining of arm pain.

According to the Pickaway Sheriff department, the Circleville Truck was being borrowed by Pickaway for some sign work on US-23. The driver of the truck lost control and left the roadway on the right side of the road and overturned the truck causing significant damage to the vehicle. The driver the sole occupant was taken to Ohio Health Berger with an arm injury and other minor scrapes and bumps.

The City of Circleville said that this bucket truck is one of the older ones they have in their fleet, so it will not slow down any needs until a replacement can be purchased.

Please use caution in the area due to the large vehicle in the area. It will most likely cause delays in the commute.

Update: One lane is closed in the southbound lane