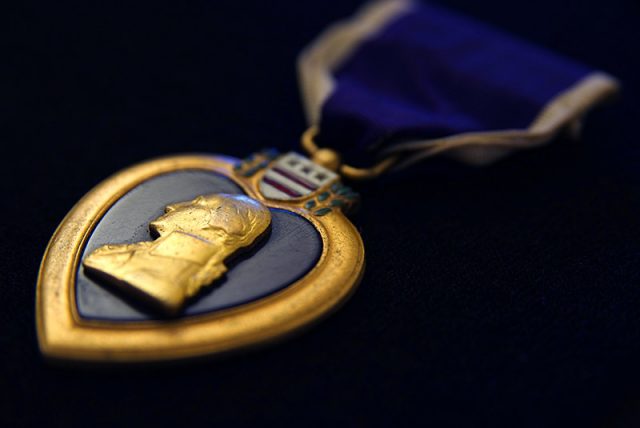 CHILLICOTHE, OH – The City of Chillicothe received the designation of a Purple Heart City during City Council’s meeting on June 28, 2021, with a ceremony from the Patriot Members of Ohio Military Order of the Purple Heart Honor Guard. This designation honors military personnel wounded and/or killed in combat by hostile forces. The honor was first created by General George Washington in 1782, known then as the Badge of Military Merit, and is the United States’ oldest military medal.

Additionally, the local committee that has been the driving force behind this designation, is working towards erecting a monument in honor of the Purple Heart City designation. This monument will be installed in Veteran’s Memorial Park, which was established in 2004 to honor the citizens of the Chillicothe-Ross County area who have served in foreign wars. Veteran’s Memorial Park is located on Park Street and Yoctangee Parkway near downtown Chillicothe’s historic district.

Currently in Ohio, there are approximately fifty Purple Heart Cities in Ohio. There are a total of ninety-seven cities, villages, counties, bridges, interstates, school, and universities designated as Purple Heart entities in the State of Ohio. These honorary visuals serve as a reminder to those passing by that other individuals have paid a high price for their freedom to travel and live in a free society.
The committee is now turning to the community for donations to help with the cost of the monument. Donations should be made payable to the Ross County Veterans Council and mailed to 230 N. Plaza Blvd., Chillicothe, OH 45601 by November 1, 2021. Please note on checks “Purple Heart” to ensure that your donation is processed for the project. Donations can also be made in- person at the Ross-Chillicothe Convention & Visitors Bureau at the same address.

There will be a commemoration event and reveal of the Purple Heart City monument that will take place on Veteran’s Day, November 11, 2021, at Veteran’s Memorial Park. More details will be announced closer to the event date. For more information, you can reach Melody Lapczynski at [email protected] or (740) 703-9957.