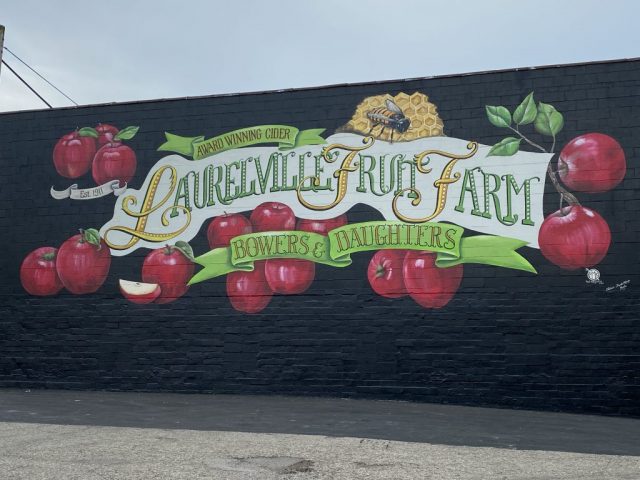 Bob Bowers is the son of the late George and Mable Bowers, former owners of the Laurelville Fruit Farm.  After graduating from the Laurelville High School, he went into the fruit business founded by his father in 1911.  In 1945, he married Eleanor Kelly and they are the parents of Bobby Bowers of Laurelville and the late Barbara Hettinger.  He has been involved as a leader in both Boy Scouts and 4-H.  He was elected to the Laurelville Village Council and also served as mayor.  His involvement in the community included working on the water and sewage for the village.  His election to the local school board has kept him involved for 51 years.  In 1988, he was awarded the All Ohio School Board Award.  He also received the Hocking County Agriculture Award in 1963 and served as state chairman of the State Advisory Board of Cooperative Extension for two years.  When his son became the owner of the fruit far, he sold automobiles for dealers in Logan.  After retirement from selling cars, he traveled for VOCA (Volunteers for Overseas Cooperative Assistance).  During this time, he made seven trips to former Soviet countries in Eastern Europe and one trip to Egypt.  In all of his travels around the world, he always expressed to others what a wonderful place Laurelville is and how proud he was to be born in Laurelville situated in the beautiful Hocking Hills.  In addition to his parents he was preceded in death by siblings George R., John N. and Ruth E. Bowers.  Bob is survived by his wife Eleanor (Decosta) Bowers, son Bobby (Sherry) Bowers, son-in-law Jim Hettinger, grandchildren Claudia (Matt) Oveman, Alicia (Andy) Fruehing, Marissa (Kyle) Andrews, Jill (Josh) Pippy, Jason Hettinger, and 13 great grandchildren.  Funeral services will be held on Monday, April 11, 2022 at 1:00 p.m. at the Wellman Funeral Home, Laurelville with burial to follow in Green Summit Cemetery.  Friends may call at the funeral home in Laurelville on Sunday from 1-4 p.m.  Memorial contributions are suggested to Trinity United Methodist Church.  Online condolences can be made to www.wellmanfuneralhomes.com.