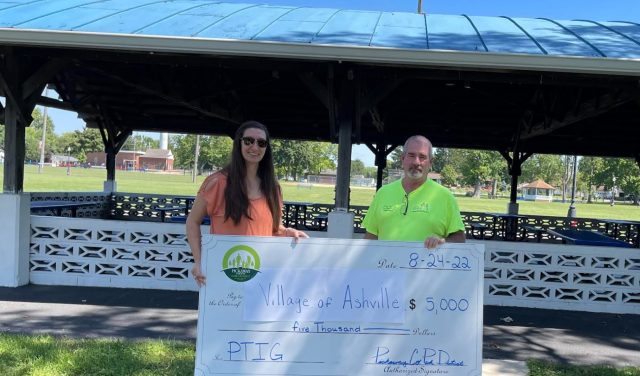 Ashville – A check was given to Ashville on Wednesday in the amount of 5,000 dollars that went towards improvements to Ashville’s park.

The money was used to fix the open shelter house roof renovation. A total of 32,900 dollars was spent to Rhinoshield the entire metal roof structure that according to Ashville’s Franklin Christman needed to be fixed due to leaks, deterioration, and it was unsightly.

“Originally we considered a replacement of the entire roof of the structure but the cost was over 100,000 dollars. The city felt that a less costly method to preserve what we had and save the taxpayers over 70,000 dollars was the way to go in this situation. We appreciate saving more with the 5,000 dollars from Park Improvement funds that came from Pickaway County Park District.”

Franklin explained that the park has gone under several renovations and the city has added several amenities to the location.

“Tables have been added this was a suggestion from Ashville’s residents, we repaired the track, and added Benches. One of the courts has been renovated into a Pickleball court. We tore down the bleacher seats due to them being unsafe.”

Christman explained that Ashville is looking to possibly add another park to the area with the growing population, More information will be shared in the future.